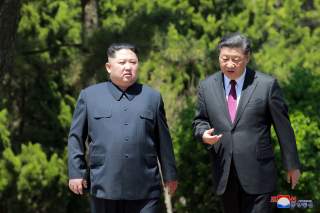 All parties to the negotiations with North Korea are trying to chart a path forward after the second Trump-Kim summit in Hanoi. Most of the post–summit analyses focus on denuclearization steps, corresponding sanctions relief, and potential symbolic moves toward peace. But the parties still have to grapple with the challenge of incorporating North Korea into a broader political and security order in Northeast Asia.

In pursuit of that goal, a foundational question remains unanswered: Is North Korea a strategic liability or an asset for China? Answering that question will be essential to forging an effective strategy for advancing talks with all the parties.

North Korea presents a strategic liability for China in four ways. First, Pyongyang’s aggressive behavior could spark war or chaos just over China’s border. Fear of that possibility was palpable during 2017 when Washington lobbed threats of “fire and fury” and North Korea tested missiles frequently. At the time, Chinese policymakers genuinely worried about instability in North Korea that could require China to send troops over the border to prevent a flood of refugees and to seize an influential stake over the country’s future. There was also the low-probability but high-consequence scenario that a war in North Korea could spiral into a great-power war with the United States and South Korea.

North Korea appeared to be dragging China into a strategic situation that was detrimental—and potentially disastrous—for Chinese interests, and thus was clearly a liability. Subsequent negotiations with North Korea have reduced the immediate risk of war or instability there, but not eliminated the danger entirely, especially if negotiations falter.

Another way that North Korea acts as a liability for China’s security interests is because Kim Jong-un’s provocations justify significant forward-deployed U.S. military presence in the region. The direct purpose of those forces is to deter aggression from Pyongyang, but Beijing sees the potential for the same military capabilities to be turned against China. The China-South Korea rift over the THAAD anti-missile system encapsulated that dynamic.

Third, North Korea’s acquisition of nuclear weapons dilutes China’s privileged position as a member of the nuclear powers club worldwide and in Northeast Asia specifically. Over time, a nuclear North Korea could beget Japanese and South Korean decisions to develop nuclear weapons of their own—an outcome China wants to avoid.

Lastly, China suffers reputational and economic costs for propping up North Korea. China’s recent domestic backsliding on human rights and detention of an estimated million Uyghurs notwithstanding, Beijing wants to be seen as a benign global power instead of a supporter of an aspiring nuclear state with an abysmal rights record. Economically, Beijing is forced to expend resources propping up Pyongyang’s economy. China also has to accept that North Korea’s basket-case economy will continue to hamper economic growth in China’s rustbelt Northeastern provinces.

Taken together, the case that North Korea constitutes a strategic liability for China is clear. But focusing on how Pyongyang is a liability looks at only one side of the equation. North Korea also provides three important benefits to China that make it a strategic asset.

First, North Korea functions as a strategic diversion for the United States and its allies in the region. Resources and attention that Washington, Tokyo, and Seoul might otherwise devote to balancing China’s growing military get diverted to deterring Pyongyang. U.S., Japanese, and South Korean national-security policy documents rank North Korea along with China as core strategic threats in Asia, which shows the relative weight they allocate the two countries in defense planning.

Second, the North Korea challenge positions China as a powerbroker in high-profile international negotiations and provides leverage China can deploy on other issues. Pyongyang’s malfeasance creates a rationale for cooperating with Beijing, whether or not that cooperation is sustained or fundamentally alters the trajectory of events. China cherishes the whip hand its gains as a result and at times tries to leverage its position to gain concessions on other issues, such as trade or Taiwan. China also wants to be seen as a global leader capable of brokering agreements to address hotspots. The North Korea challenge provides a perfect opportunity for China to play that role while gaining bargaining power in U.S.-China relations.

Finally, North Korea acts as both a geopolitical and ideological buffer between U.S.-allied South Korea and China. The geopolitical benefits are straightforward: no U.S. or allied troops on China’s border. But the ideological aspect matters as well. North Korea’s authoritarian governance model supports China’s objective to hold back the tide of democracy in Asia. Beijing’s and Pyongyang’s versions of authoritarianism differ in important ways, and they have generated profoundly divergent standards of living for their citizens. But North Korea remains a bulwark of authoritarianism on China’s border. As the Chinese Communist Party sees it, better to have a shaky alliance with a wayward authoritarian regime in North Korea than allow the advancement of U.S. military power and democratic values in the region.

Assessing China’s cost-benefit analysis with regard to North Korea must account for the ways Pyongyang is a liability and the ways in which it is an asset. Too often U.S. officials and analysts focus only on the liabilities because they serve as useful arguments when trying to persuade Beijing to align its policy with the United States. But the ways in which North Korea bolsters China’s strategic position persist—and have likely been strengthened as strategic competition comes to define U.S.-China relations.

Only by considering both sides of the ledger can we explain Chinese policies that attempt to strike a precarious balance between pressuring North Korea on the one hand and staving off regime collapse or major political changes in the country on the other. This is not just an academic question. As negotiations about the future of the Korean Peninsula proceed, understanding the full scope of China’s geopolitical calculus will be critical for any efforts to incentivize China to play a constructive role rather than enable Pyongyang’s transgressions.

Jacob Stokes is a senior policy analyst in the China program at the United States Institute of Peace. He previously served on Vice President Joe Biden’s national security staff and as a professional staff member for the U.S.-China Economic and Security Review Commission.