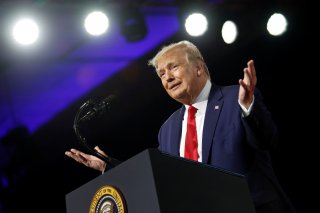 While the pundits are as confident today of a Biden victory as they were that Hillary would win in 2016, I have found Ladbrokes to be better than pollsters and pundits at assessing the odds. Today Ladbrokes gives Trump a 50 percent chance of winning. It could happen.

If so, my best bet is that policy towards North Korea will be a continuation of the policy we saw emerge in Trump’s first term.

1. Expect more continuity than change. While North Korea remains extremely dangerous, U.S., South Korean, and even North Korean policy will essentially be more similar to what we’ve seen in the past several years than different.

3. The Trump administration will continue to focus on preventing North Korea from completing the testing of ICBMs and reentry vehicles that would give it a reliable, credible threat to strike the American homeland. They will continue to do that by credibly threatening to attack North Korean launch sites in order to prevent these tests from happening. While Trump’s approach in his first term was certainly unorthodox, he demonstrated the effectiveness of what deterrence theorists call the “madman” theory. The Trump administration will also include continuing efforts to tighten economic sanctions to persuade Pyongyang to start down a path to denuclearization.

4. A crucial player in pushing North Korea to take appropriate steps is China. And the key factor for China is its fear that the United States might attack North Korea, trigger war on the Korean Peninsula, and then possibly force China to become involved in a reprise of the Korean War. North Korea is not on China’s priority list but preventing events in North Korea that could drag it into a crisis, and even a war, is.

5. If despite Trump’s best efforts, then North Korea nonetheless finds a way to unambiguously cross the bright red line to acquire a credible threat to attack American cities with nuclear weapons, that will be a huge loss from the perspective of American national interests. Consider: why in the transition from President Barack Obama to President Donald Trump did Obama tell Trump that the North Korea challenge would define his presidency?

That said, if we imagine Trump reelected—trumping the establishment’s expectations—what could an emboldened Trump do? Facing the newly empowered president, Kim would almost certainly be less willing to risk a provocation that could threaten his regime. An unrestrained Trump could be willing to make a major deal with Kim that would include step-by-step reductions in U.S. troops in South Korea for equivalent steps towards denuclearization. Stretching, one can even imagine his pursuing a grand bargain in which for denuclearization, the United States would sign a peace treaty that saw all American forces leave the peninsula and the end of the U.S.-South Korea defense alliance.

Of course, other governments, and in particular South Korea, facing an emboldened Trump, will be reconsidering their own options. The president will surely be pressing them to pay more for their own protection, and he clearly has doubts defending South, so they might well reconsider their nuclear options.