President Biden Would Face a Tough Road Ahead on North Korea 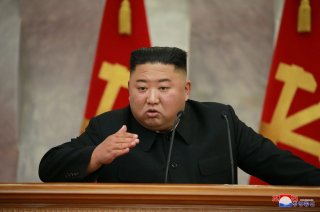 At this stage, details of presidential candidate Joe Biden’s North Korea policy are probably still being ironed out. However, based on his public comments and recent Foreign Affairs article, some key pillars of his approach can be gleaned. First, he apparently is unlikely to implement any drastic change to core principles and goals in U.S. North Korea policy, which have broadly been consistent throughout successive American administrations since the first nuclear crisis of the 1990s. But a potential Biden administration’s strategy, tactics, and methods appear set to be quite different from Trump’s.

Vice President Biden has stated that his ultimate goal is a denuclearized North Korea—including the prevention of Pyongyang’s nuclear weapons proliferation—achieved through sustained, principled diplomacy in coordination with American allies, partners, and China. He has stated a willingness to tighten sanctions until North Korea gives up all of its nuclear weapons programs while, though it would seem contradictory, also insisting on substantial disarmament before relieving sanctions. He just has to, in his words, “set the right formula” of sanctions enforcement and relief. Granted, the specifics of this formula have yet to be elaborated upon. Biden also says he will pressure China to push North Korea towards denuclearization and an end to missile launches while making it clear to Beijing that Washington will move to protect American interests and strengthen defenses against nuclear weapons.

Marking his difference with the current President, Biden said he would only be willing to meet with Kim Jong-un after preconditions are met and if a meeting were part of a strategy that “moved the ball forward on denuclearization.” He also said that he would make “credible efforts to offer an alternative vision for a nonnuclear future to Kim and the people of North Korea.” Finally, he has implied he will not turn a blind eye to North Korean human rights violations, though without making clear what the potential consequences might be.

The soundness of Biden’s stated vision aside, if elected he almost certainly will face some tough challenges. For one, North Korea’s nuclear weapons capability will be more advanced and sophisticated than it was four years or even a year ago. Second, future negotiations could become more complicated if Pyongyang resumes the full range of missile and weapons tests in the period between his election victory and Inauguration Day. Even without such actions during that timeframe—actions which North Korea might take to gain leverage ahead of any future talks with an incoming Biden administration—negotiations will be difficult to resume if Pyongyang continues to condition these on an end to all U.S.-South Korea military drills and removal of key United Nations sanctions. Third, breaking the diplomatic stalemate will be problematic if North Korea maintains its position that the only deal it is prepared to contemplate is to shutter its Yongbyon nuclear complex in exchange for the removal of key UN Security Council sanctions.

Challenges in the geopolitical landscape of Northeast Asia could also limit America’s policy options. Divergent U.S. and Chinese priorities on North Korea will be difficult to reconcile, more so in the current environment of increasing rivalry. Meanwhile, South Korea-Japan tensions continue to disrupt trilateral cooperation with America. A potential Biden administration’s priorities and preferred sequencing of bargains, at least as suggested publicly by campaign positions, would be at odds with those of South Korea’s Moon government, complicating the close coordination between the two that will be essential for successful diplomacy.

If Biden is elected, U.S. and North Korean negotiatiors should return to talks without preconditions, empowered and prepared to discuss a range of creative compromises. They should begin by mapping out a denuclearization-peace roadmap based on proportionate bargains outlining pathways toward denuclearization, new relations, and peace. The status quo over the long-term will not benefit either side.

Duyeon Kim is Senior Advisor for Northeast Asia and Nuclear Policy at the International Crisis Group and a Columnist with the Bulletin of the Atomic Scientists. She is also a Nonresident Senior Fellow at the Center for a New American Security. The views expressed are her own.