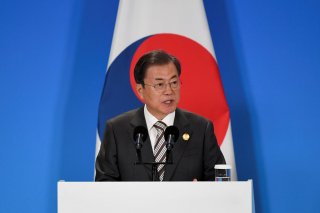 On April 15, South Koreans will head to the polls in their first National Assembly election since the impeachment of Park Geun-hye and amidst the ongoing coronavirus pandemic. Voter motivation is high—with 80 percent saying they are certain to vote—and the election is being framed as a referendum on the leadership of President Moon Jae-in. While he and his party enter the election in strong positions, the data suggests that this election will be closer than many expect.

If this election is indeed to be a referendum on Mr. Moon’s leadership, he enters that test at his strongest point in sixteen months. Just four weeks ago, faced with what was then the world’s most serious COVID-19 outbreak outside of China and countries from around the world restricting the entry of South Korean travelers, his approval rate stood at 42 percent. Today, with that outbreak contained, the world looks to South Korea as a model for how to fight the coronavirus. Concern about COVID-19 has also begun to decline, with 48 percent of the South Korean public now saying they are likely to contract the virus compared to 59 percent in late February. On the back of this mixture of domestic success and international praise, Mr. Moon’s approval rate is now at 55 percent, a number last reached in November 2018.

But it’s not all good news for President Moon. Perceptions about the economy have trended increasingly negative throughout his term in office. While 17 percent say that the economy will improve over the next year, 57 percent say it will worsen for a net score of negative 40. In September of 2017, that score was negative 8. Furthermore, just 12 percent expect their personal economic situations to improve versus 40 percent who think it will worsen—a net score of negative 28. That is the single worst net score during Mr. Moon’s presidency.

These negative perceptions on the economy have not dented either the president or his Democratic Party (DP). Nor have they given rise to increased support for the opposition United Future Party (UFP). In recent polling, the DP garnered 37 percent support to the UFP’s 22 percent—a gap that has remained virtually unchanged over the past 6 months.

Yet, that advantage in the polls may be misleading.

Of South Korea’s 300 National Assembly representatives, 253 are candidates directly elected by constituents. The remaining 47 are decided through proportional representation. This opens the possibility of split-ticket voting in which voters cast their ballot for their favored candidate in their district but cast their proportional ballot for a different party altogether. This is unlikely to happen for supporters of either of the major parties. When asked, 84 percent of DP supporters say they want the ruling party to maintain its majority while 92 percent of UFP supporters favor the opposition gaining the majority.

However, self-reported Independents make up a little more than one-quarter—27 percent—of all respondents and stand to have a major influence on the outcome. While not professing a partisan allegiance, these respondents may not be true Independents. One-quarter report being ideologically conservative and 30 percent say they are moderates. Just 14 percent report as progressive; for comparison, 67 percent of DP supporters say they are progressive. Moreover, Independents break in favor of seeing the opposition party—the conservative UFP—retake the majority by a 37-27 split.

Given the deep political polarization, ongoing economic uncertainty, and security tensions in the region, this will be one of the most consequential National Assembly elections in Korea’s history. While the DP may very well pull out a narrow victory, the UFP has the chance to outperform the polls. Given the absolute disarray of the party over the past three years, even that would be a remarkable feat.

Mr. Karl Friedhoff is a fellow in public opinion and Asia policy at the Chicago Council on Global Affairs.