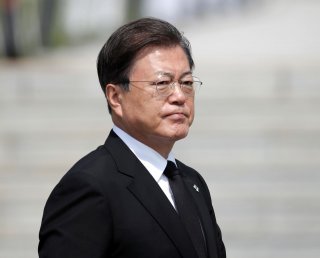 It’s not exactly unprecedented for North Korean defector groups operating in the South to send thousands of anti-Pyongyang leaflets across the border to spread a message of freedom to the North Korean people. These groups have been executing such operations for years. The two Koreas deployed propaganda games throughout the Cold War to needle each other and convince the other side that they were on the wrong end of history. The Kim dynasty is notoriously alarmed by anything smacking of disrespect to the leadership; during one leaflet operation in 2014, North Korean troops fired machine guns rounds into the South in retaliation.

While Pyongyang hasn’t reacted to this year’s leaflet drops with that kind of violence, the Kim dynasty’s level of anger about anti-North propaganda isn’t any less acidic today than it was six, twenty, or forty years earlier. The one big difference between now and then: whereas previous governments in Seoul would provide South-based defectors groups with a modicum of freedom, today’s South Korean government is far less sympathetic to such freelancing.

When a group calling itself Fighters for Free North Korea unleashed hundreds of thousands of anti-Kim leaflets into the North on May 31, President Moon Jae-in’s administration responded with almost immediate condemnation. On June 10, the South Korean Unification Ministry announced that the two defector groups involved in the operation would be charged with breaking the law. A week later, Seoul revoked their licenses, arguing that unauthorized leafleting of the North “severely hindered” the Moon administration’s peace agenda with Pyongyang and created environmental and safety risks for border communities. Those measures were blasted as wholly inappropriate by Moon’s conservative political critics. Human rights organizations denounced the criminal charges as disgusting in terms of the optics and a government-sponsored violation of the very right to free speech and political expression South Koreans have valued since their country became a democracy.

Two months later, Seoul’s pressure campaign on North Korean defectors and activists has gotten the attention of former U.S. government officials who served in both Democratic and Republican administrations. After the Unification Ministry announced inspections of twenty-five defector-run NGO’s and requests on another 289 organizations to prove each was properly registered, thirteen former U.S. officials—including Robert King, the former special envoy for North Korea human rights—sent an open letter to President Moon expressing their concerns. The letter described the strong tactics against the NGO’s as “a chilling form of intimidation” designed to deter them from continuing their work on behalf of the North Korean people. Roberta Cohen, a former deputy assistant secretary of state for human rights in the Jimmy Carter administration, bluntly told Voice of America on August 13 that “Here [in the U.S.], there is really a bipartisan view that this is a mistake.”

To these officials, Seoul’s crackdown on anti-Pyongyang groups is nothing more than an attempt to stifle political dissent in order to face save with North Korea and preserve some operating space for a potential dialogue. To be fair, it’s not a completely irrational thought.

Even so, all of this legal action and regulatory maneuvering should be put into context. While limiting the activities of those vowing to liberate the North Korean people is terrible for the Moon administration from a public relations perspective and rubs a lot of people in the human rights community the wrong way, they are also understandable when one takes a step back to survey the bigger geopolitical picture.

There is no avoiding the reality that Inter-Korean relations are in a state of extreme fragility. President Moon, who came into office with a solid pro-peace record, has crossed the mid-way point of his tenure with dreams of inter-Korean peace and prosperity far from being realized. Moon’s reconciliation initiative with Pyongyang and his personal diplomacy with Kim have also taken a nosedive over the last two years. The comprehensive military de-escalation accord signed between the North and South in September 2018 and the Panmunjom Declaration that was inked five months earlier are, for all intents and purposes, dormant documents. Indeed, they have been replaced by the destroyed inter-Korean joint liaison office and heated invective from Kim Yo-jong’s blustery pen. Promise and possibility have transformed into punkishness and pillory in less than a year. With the small exception of a liquor-for-sugar barter scheme between North and South Korean farmers promoted by newly-minted Unification Minister Lee in-young, the only thing consistent about inter-Korean relations right now is how unproductive those relations are.

So, you can feel a tingle of sympathy for Moon and the rest of his government when organizations (however noble their intentions) violate the law, give the Kim dynasty another reason to doubt the South’s intentions. Moreover, those defector groups put Seoul on the hook for breaking the 2018 military de-escalation agreement—an agreement that specifically cites the prohibition of cross-border leaflet operations.

For many in the West, the South Korean government should at the very least stop pressuring these brave North Korean dissidents. At most, Seoul would be supporting their work.

But for Moon, chucking paper into North Korea to simply embarrass the Kim dynasty and prove a point is a needless, counterproductive and ineffective exercise in futility. While it may make us feel good for a moment, it also complicates an already frozen reconciliation process on the Korean Peninsula.