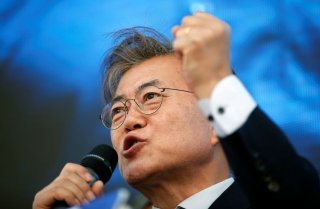 The ruling Democratic Party of Korea won an unprecedented landslide in South Korea’s 21st General Election, held April 15. Not only did the Democrats win an outright majority, they are close to winning a 60 percent supermajority.

After three years of slow economic growth in which President Moon Jae-in’s diplomatic efforts with North Korea went nowhere, Moon’s popularity had fallen from the high 70’s to the mid-40’s in early 2020. It looked like he might be set to follow the same trend as previous Korean presidents, lapsing into lame duck status in the final two years of his presidency.

But the coronavirus changed everything. With South Korea using aggressive to test and trace measures, widespread monitoring, and imposing strict quarantine measures on foreign travelers, it flattened the curve faster than almost any other country. As a result, Moon’s popularity rose above 50 percent before the election. Now the Democrats have won more seats than even the most audacious analysts predicted.

As of 1 am Korea time, Korea’s public broadcaster Munhwa Broadcasting Corporation (MBC) projected the Democratic Party to be on track to win about 174 seats, while the opposition United Future Party (UFP) would win about 109. The target for a super-majority is 180 seats. Projections leave only about 17 seats for minor parties and independents, a huge drop from the 55 seats won by all third-party candidates in 2016.

The partisan-regional divide was exacerbated. The Democrats dominated the west side of Korea, while the UFP painted the east pink. The Democrats are expected to win nearly 100 of the 122 seats in the Seoul Capital Area, which consists of the city of Seoul, Incheon, and the Seoul suburbs in surrounding Gyeonggi province.

The Democrats also won back almost every single seat in the Honam (Jeolla) region in the southwest of the peninsula, which the People’s Party had dominated in 2016. That partially accounts for the decline of minor parties this time around.

While the Democrats ran up the score in the west, the UFP was unable to make up for it in the conservative east. The Democrats came close to breaking even there. The UFP did dominate in Busan, decreasing Democrats from six to two of Busan’s eighteen seats. In Daegu, the UFP also defeated Kim Bu-gyeom, the only Democrat to ever have won a seat in the conservative city, by shifting one of its incumbents, Ju Ho-young, from one seat over to challenge Kim. But in South Gyeongsang, the Democrats held onto three seats, and in northeastern Gangwon province, the Democrats gained seats, from one in 2016 to three.

Overall, the election appeared to have been run smoothly. Despite coronavirus, turnout was up, fueled by increased early voting and a nationwide determination to show Korea can overcome. Sections of polling places were specially opened one hour after regular closing time to accommodate voters who were in self-isolation.

Korea’s conservative movement has been in disarray since 2016, when LKP president Park Geun-hye was impeached. The LKP broke apart and the conservatives got trounced in the 2018 by-elections. Moreover, in 2019 the party was consumed with protests inside the Assembly and then the various conservative factions tried to unite just two months before the elections, under the UFP. Clearly, they haven’t overcome their problems yet, and they will need to work hard at that before the 2022 presidential election.

The Democrats will now have a much easier time passing bills through the Assembly without having to string together a coalition of minor parties. However, the problems they face as the global economy enters a coronavirus-induced depression will be immense.