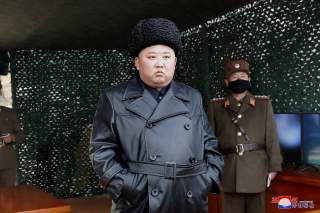 The first and main victim of the disease, so far, at least, was the People’s Republic of China. If data from the PRC about COVID-19, as the virus has been named, is correct—admittedly a major if—China’s crisis may be easing. New infections are down and the latest deaths are concentrated in Hubei province, the epidemic’s epicenter. Indeed, Beijing has begun planning to prevent a possible second infection wave created by Chinese returning from new disease hotspots, including Japan and South Korea.

The economy, too, has suffered. At the peak, some eighty cities and nearly 800 million people faced some mix of quarantine, isolation, and restriction. People were ordered to stay home, businesses were forced to close, transportation was cut, and hospitals were filled. The worst-hit cities, such as Hubei’s capital of Wuhan, took on a ghostly hue. Travel restrictions prevented people from moving internally, including millions of migrant workers who fuel many export industries.

Just as the PRC is starting to recover economically, major trading partners Japan and South Korea are taking tougher steps to extinguish the fast-moving disease. Both countries are adopting some of Beijing’s tough quarantine policies, which could push those two states into recession. China might face slumping demand for its products and diminishing imports necessary for its own operations. At the moment the long-term damage can only be estimated.

Still, despite the tough times, the PRC is big enough and wealthy enough to persevere. Recovery will come. But what of North Korea?

The Democratic People’s Republic of Korea is uniquely vulnerable to the ongoing epidemic. The North’s international contacts are limited but dominated by the PRC, the epicenter of the coronavirus. Although sanctions limit economic ties, illicit traffic has continued across the border. Moreover, Beijing sometimes loosens enforcement, based on larger political trends.

Worse, the DPRK is a poor nation. There is no surplus available for the proverbial rainy day. Under pressure from enhanced sanctions, the economy is estimated to have shrunk four percent in 2018. There is little evidence of a turnaround last year. Even before the emergence of the coronavirus, in December Kim warned of greater economic hardship. He indicated that the collapse in negotiations between Pyongyang and Washington would be followed by a greater emphasis on the military to ensure regime survival. That will leave even fewer resources available to deal with a health crisis.

Pyongyang’s containment measures will further damage the economy. The Kim regime reportedly has ended cross-border trade and cracked down on smuggling: Chinese goods are vanishing on the North Korean market. This policy ironically enhances the impact of U.S. and international sanctions, denying Pyongyang much of the limited hard currency to which it previously had access. Self-imposed isolation also restricts supplies of essential goods and closes off private market activity upon which many North Koreans rely.

The regime has responded with further economic restrictions. Reported the Washington Post: “Market information compiled by Daily NK shows prices of rice, corn, diesel and gas all rising, some to their highest levels in a year or two. The regime has responded by trying to impose price controls and ordering sugar and soybean distributors to release stocks.” These steps are at best temporary palliatives and will only worsen the long-term problem.

If Pyongyang ends up facing widespread infection and seeks to keep its population at home, the situation will become far worse. North Koreans, already on the economic edge, would find it far more difficult to cope with a widespread industrial shutdown approaching than did China. Moreover, a national quarantine would preclude the dramatic rise in private market activity that helped lessen the horrors of the deadly famine in the late 1990s.

Perhaps worst of all, many North Koreans are malnourished, indeed, suffering from stunted growth, and thus more vulnerable to infection. Diseases like tuberculosis already abound. Yet the country has only limited medical capabilities. Hospitals and other medical facilities lack adequate electricity, medicine, sanitation, and water. Many of the North’s most critical health care needs are provided by foreign NGOs.

Observed Harvard Medical School’s Kee Park, who has traveled often to North Korea, “They may be able to successfully treat a limited number of severe COVID-19 cases but, if there is anything we can learn from the Chinese and South Korean experiences, their capacity to treat will be quickly overwhelmed.” A genuine pandemic would swamp the health care system, exacerbating the human harm. Last year the Global Health Security Index rated North Korea as among the world’s least prepared nations in dealing with a health care disaster and at the very bottom in providing “rapid response and mitigation of the spread of an epidemic.”

Perhaps the North’s only advantages are its relative international isolation, long-time limitations on travel, and the government’s ability to ruthlessly quarantine anyone infected or feared to be infected. Still, they will be inadequate to counteract the much greater negatives.

The only good news, for the North’s neighbors, at least, is that the DPRK is not likely to become a major source of infection since it lacks the economic size and integration of China, Japan, and South Korea. But its isolation, compounded by inadequate domestic treatment, minimal foreign assistance, and nonexistent information sharing, could result in unpredictable developments shielded from medical researchers elsewhere.

So far Pyongyang denies there are any infections. However, North Korean media indicate that people are in quarantine. For instance, the official Rodong Sinmun reported that: “people who returned from abroad and contacted with foreigners and those who show abnormal symptoms are also isolated for medical observation and checkup.” The North stated that it was monitoring citizens with symptoms of the virus. South Korean intelligence believed 7,000 people were in quarantine. Reported the Washington Post: “three news outlets with extensive contacts inside the country, NK News, Daily NK and AsiaPress, have reported cases in the border cities of Sinuiju or Rason and said that some people may already have died.”

China’s United Nations ambassador, Zhang Jun, said the disease had “negatively” impacted the DPRK. However, he added: “We know that they are also attaching great importance, and taking preventive methods, and they are also doing whatever they can in fighting this virus.” He urged a relaxation of sanctions on the North: “We do hope that all parties should give a second thought on this issue.”

Some of Pyongyang’s measures appear to be prophylactic, if overbroad. For instance, the regime temporarily closed some European missions and embassies. North Korea’s diplomats in Rome reportedly are prohibited from leaving their premises. The North banned tourists in January. Foreign visitors were quarantined and movements of foreign diplomats were limited. Then the DPRK closed its borders to all foreigners.

Vice Minister of Public Health Kim Hyong Hun asserted that this policy had been successful. He explained: “Until ways to diagnose and cure [COVID-19] are completely established, this measure will continue.” Indeed, said Kim, the country is creating a “national emergency quarantine system.”

The official Korean Central Television has run daily programs on preventive efforts. One show declared: “Let us completely block the novel coronavirus.” State workers have been shown in protective clothing disinfecting public areas. Premier Kim Jae Ryong was pictured leading “anti-epidemic” policies wearing a facemask. A picture of Kim observing a military operation featured an officer near him wearing a mask. On other occasions, officials accompanying him have been shown with masks.

Internal media coverage has been heavy. The official Rodong Sinmun urged its citizens not to eat together in restaurants, since “Talking while eating would become a major route of infection.” Schools have been closed, with the government extending students’ winter breaks “in order to block in advance the spread of the disease,” according to the paper. Also closed are “public amenities,” most notably recreational facilities. The April 12 marathon has been canceled. The regime reportedly has mandated cremation rather than burial for the dead.

Finally, military gatherings, such as parades, apparently have been limited to minimize large concentrations of troops. Some observers believe that Kim has reduced his appearances in response to the disease outbreak. Overall, the Rodong Sinmun declared that North Korea is working for “national survival.”

But all does not appear to be well in the kingdom. The politburo met at the end of February and approved plans to “supplement and complement the law on the state emergency anti-epidemic and to readjust state crisis control regulations.” Government media criticized the public for not following government directives and health care workers for not treating the threat more seriously.

Overall, the regime’s steps are more restrictive than those imposed in response to the earlier SARS and Ebola epidemics. Pyongyang banned tourism and travel by its own citizens, suspended some flights, quarantined visitors from SARS-affected nations, and subjected foreign residents to medical observation. However, the DPRK did not seal its border. Rachel Minyoung Lee with NK News observed: “North Korea's handling of the coronavirus is unusually high-profile compared to past epidemics and reflects regime concern about the issue."