The Remaking of South Korean Conservatism in the Age of Trump 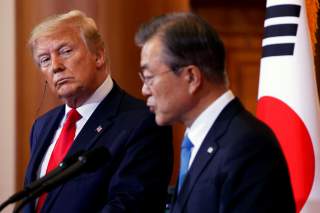 The chemistry between Donald Trump and Kim Jong-un has proved resilient to diplomatic doldrums. Trump has defended Kim against the revelations of another violent purge and applauded him for calling the Democratic frontrunner Joe Biden a “low IQ individual.” Not long after, they met for a widely featured handshake at the Korean border, making Trump the first sitting U.S. president to step on North Korean soil. Though little substantive progress was made in its aftermath, Trump has continued to excuse Kim’s missile launches as “standard” while deriding the U.S.-South Korea joint military exercises as “ridiculous and expensive.” Now with the timely exit of John Bolton, hopes of another Trump-Kim summit are on the rise again.

Among the biggest losers of this largely hollow diplomatic exercise are South Korea’s conservatives. For them, Trump’s adulation of Kim poses a threat that is more profound than their policy setback on North Korea—it challenges their identity, which for decades had been defined by its anti-North Korean and pro-U.S. stance. One debate, in particular, lays bare this struggle: South Korea’s nuclear armament.

South Korean conservatives’ unfailing support for the United States had been predicated on the idea of a shared and increasingly menacing North Korean nuclear threat. Today, this belief is being reexamined⁠⁠⁠. Confronted by the growing possibility of a “small deal”—anything that falls short of complete, verifiable, and irreversible denuclearization—conservatives have started to reconsider South Korea’s nuclear armament. In what appeared as a warning to Washington, a prominent conservative lawmaker Na Kyung-won stated, “If the United States accepts North Korea as the de facto nuclear state through a small deal, acquiring nuclear weapons is the only viable path for us.” What form and process this path takes, and the degree to which the United States will remain responsible for South Korea’s security, will be pivotal for the future of U.S.-South Korean relations and, consequently, South Korean conservatism.

The conservatives offer three competing options for nuclear armament. The first and most popular is the redeployment of U.S. tactical nuclear weapons, which the main conservative Liberty Korea Party (LKP) officially supports. According to the proponents of this position, the U.S. decision in 1991 to unilaterally withdraw its nuclear assets from South Korea was a historic blunder: it undermined the credibility of U.S. extended deterrence and ultimately opened the door for Pyongyang to develop nuclear weapons without any fear of retaliation. To correct the “imbalance of terror” that currently favors the North, they demand the return of U.S. nuclear presence in the South.

By contrast, the minor conservative Bareun Party (BP) prefers NATO-style “nuclear sharing,” which would grant Seoul access to U.S. nuclear assets operating outside the peninsula. The concept is not new; a similar deal is already in place among NATO countries. There are close to two hundred tactical nuclear bombs deployed in Germany, Belgium, Turkey, Italy, and the Netherlands, which they can deliver in emergency situations with the approval of the United States. A key advantage of this arrangement, the BP argues, is that it does not require physically placing nuclear weapons on South Korean soil—an undertaking that would likely provoke strong reprisals from its neighbors, such as China and Russia.

The last option is the indigenous development of nuclear weapons. Though currently in the fringes, support for this alternative is visible and growing. During a recent parliamentary seminar on nuclear armament, LKP chairman and presidential candidate Hwang Kyo-ahn stated, “Considering our country's reality […] having independent nuclear armament can no longer be overlooked. South Korea's own nuclear armament would not be an easy job but it should be discussed nationally and internationally.” Recently, LKP lawmaker Won Yoo-chul reaffirmed this view—with greater conviction: “[the LKP is] preparing for Korean-style nuclear capability as a real and viable alternative.”

The shift in the conservatives’ debate surrounding nuclear armament signals a broader shift in its identity. When ex-LKP chairman Hong Joon-pyo called for South Korea’s indigenous nuclear development and withdrawal from the Non-Proliferation Treaty (NPT) two years ago, BP lawmaker Ha Tae-kyung rebuffed in horror that it would be a “direct challenge to the U.S.-led world order to bow out of the NPT, which the U.S. created.” Ha is right: South Korea’s nuclear armament would likely trigger an arms race in the region and jeopardize the very regime through which its precarious stability had been guarded to date. But beyond these ramifications, that influential mainstream conservatives have begun to raise the possibilities of self-nuclearization⁠—with growing regularity⁠—also indicates they are becoming accustomed to imagining a future apart from, and even in defiance of, the United States.

Conservative voices are expected to toughen on nuclear armament as their fears of “Korea passing” intensify. Broadly, “Korea passing” refers to situations in which South Korea is overlooked in decisions affecting the Korean Peninsula. The expression first gained traction in 2017 when threats of “fire and fury” abounded and the prospect of preventive war loomed larger by the day. Today, multiple rounds of summitry later, “Korea passing” has morphed into a less overt yet equally detrimental possibility for the South Korean conservatives: abandonment by the United States.

Their skepticism about the nuclear freeze is telling in this regard. Nuclear freeze is a tit-for-tat arrangement: Pyongyang would halt its nuclear production in return for a corresponding concession by Washington, such as suspending military drills or easing sanctions. South Korean conservatives fear that this kind of “small deal” will, over time, legitimize the North as a nuclear power. After all, it would be allowed to keep its existing nuclear assets and could, with relative ease, backtrack on any steps it takes toward denuclearization. Once frozen, Pyongyang might even demand the United States to withdraw its nuclear guarantees and troops from South Korea—and, tempted by a diplomatic victory, Washington might oblige in defiance of its alliance commitments to Seoul.

This scenario is not far-fetched for the South Korean conservatives. Since the Singapore summit, Trump has conferred unprecedented legitimacy on the North Korean leader in return for a series of ambiguous measures to “work towards” denuclearization. More alarming was Trump’s unilateral pledge to suspend the U.S.-South Korean military exercises, which he claimed were “provocative.” Appalled by Trump’s decision, conservative lawmaker and ex-general Kim Joong-ro retorted, “What is the point of having U.S. forces stationed in the South if we are not running the drills together?” Trump may agree on this point; he has long mused about withdrawing U.S. troops from South Korea.

Even in the face of renewed transgressions by the North, Trump has remained defensive of Kim. In May, when Pyongyang resumed missile firings, Trump remarked that he was not “personally” bothered and emphasized instead its refrain from nuclear testing. Officially, Washington sought to downplay the severity of the situation: it stressed that the projectiles were not “long-range, intercontinental missiles” and, therefore, constituted no breach of the Singapore agreement. Then in July, when Pyongyang heightened its missile launches, Trump reiterated that Kim “did not say [they were] a warning to the United States.” For many in Seoul, this demonstrated Trump’s blatant disregard for the U.S.-South Korean alliance. In their view, the notion that Washington might abandon Seoul—once direct threats to the United States were eliminated—was becoming dangerously plausible.

Conservative Identity in the Age of Trump

In his speech on September 6, U.S. special envoy for North Korea Stephen Biegun asked, “At what point will voices in South Korea or Japan, and elsewhere in Asia, begin to ask if they need to reconsider their own nuclear capabilities?” Conservative media outlets in South Korea took immediate and enthusiastic note. Recalling his remarks, a Joongang article argued that nuclear armament is the only “logical” step forward for South Korea. A Chosun editorial echoed this view: while the issue of nuclear armament serves, for the moment, as a rhetorical device to pressure Pyongyang, it will resurface as a vital policy alternative should the U.S.-North Korean dialogue fail.

As Washington and Pyongyang mull over another summit and evidence of “Korea passing” amasses, greater attention must be paid to the developments in the South Korean conservatives’ support for nuclear armament. Indeed, though their debates have remained largely abstract, they reveal the conservatives’ declining faith in the U.S.-South Korean alliance. Over time, this may drive a fundamental change in what has been an enduring and mutually exclusive dichotomy in South Korean conservative identity⁠—anti-North Korean and pro-United States.

Eun A Jo is a PhD student in the Department of Government at Cornell University.