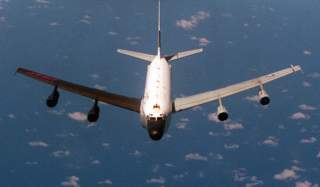 North Korea’s Vice Foreign Minister Ri Thae Song was twirling his proverbial mustache when on December 3, 2019 he promised a ‘Christmas Gift” this holiday season due to the failure of long-stalled negotiations with Washington to bear fruit.

This threat is believed to herald a new North Korean weapons test, possibly of an improved intercontinental-class ballistic missile (ICBM) capable of hitting targets in North America. It’s feared North Korea may develop a long-range solid-fuel rocket that could be launched with very little warning, unlike the liquid-fuel Hwasong-14 rocket launched July 4, 2017.

However, the main effort has come from Air Force RC-135S, V and W electronic spy planes based on the now antiquated Boeing 707 airliner. Despite having been refitted at the turn of the century with more efficient F108 turbofans, these dinosaurs remain difficult to maintain and expensive to operate—but bring unparalleled snooping capabilities into the fold.

The Air Force currently operates 22 RC-135s in the 55th Wing based in Offutt Air Force Base, Nebraska. Two of the three distinct types of RC-135s have been active over Korea.

Unlike Cold War photo-recon aircraft like the U-2 and SR-71 Blackbird, RC-135s aren’t designed to evade missiles and interceptors in risky overflights. Indeed, they’re perfectly content to cruise by dozen miles away in international airspace, using antennas studding their airframes to soak up all the information they need in missions that can last up to 20 hours factoring in refueling.

The seventeen RC-135U and W Rivet Joint aircraft are specialized in Signals Intelligence (SIGINT). That means they’re the ultimate flying wireless snoops, listening in on radio traffic from 150 miles away or further. (U and W models have the same equipment, but were converted from different base aircraft.)

In addition to their three-person flight crew, Rivet Joint aircraft carry 21-27 specialists including operators skilled in decryption and linguistic to decode and translate signals, electronic warfare experts (“Ravens”), and systems engineers. These can relay critical information rapidly via radios and a satellite uplink.

Electronic Support Measure (ESM) sensors can detect and analyze those signatures, comparing them to an established threat library to determine what type of system is being used where creating a composite picture of forces in the theater called an ‘Electronic Order of Battle.” In fact, collecting sensor data to populate threat libraries with real-world data is electronic intelligence’s main peacetime jobs.

But electromagnetic sensors aren’t just useful for identification—they can also geo-locate the signal’s point of origin.  In conflict situations, that data can and has been used to target deadly attacks.

Cobra Ball: Keeping an Eye on the Missile

The U.S. has developed a first-of-its-kind missile defense system that could possibly intercept a limited missile attack—but only if the performance characteristics of the incoming missile are well understood.

Thus, Cobra Ball aircraft uses powerful electro-optical sensors in side-mounted flanges to study missiles mid-flight—an activity known as Measurement and Signature Intelligence (MASINT). In fact, the black paint on their right wings is intended to minimize reflected sunlight that could interfere with those sensors.

The Air Force and Navy have other aircraft that can backup Rivet Joints.

The Navy flies P-3C and EP-3E Orion turbo-prop reconnaissance planes equipped for snooping. These have been spotted performing flybys of Korea in December 2109, as have Air Force E-8 JSTARs flying command posts which use surface-scanning radars to track ground forces, and dispose of a multitude of onboard radios to coordinate friendly units into action.

The Air Force also has used huge RQ-4B Global Hawk drones designed to cruise at 90,000 feet, scooping up wide-area surveillance data with a combination of radar, optical and infrared sensors, and even an optional signals intelligence payload.

So what are all these spy planes good for?

America’s electronic spies can collect vital information on where North Korea’s missiles are launching from, the electromagnetic activity and signals traffic associated with those launches, and the telemetry and characteristics of the missile as its arc into the sky.

In a wartime emergency, that information could provide early warning of missile launches, allow launching of rapid counterstrikes or preemptive attacks on launch sites, and improve the odds of intercepting missiles that make into the air.

Hopefully, that intelligence edge will never see use in combat.  But in the long-running showdown between Pyongyang, Washington and Seoul it pays to have that kind of information on deck.