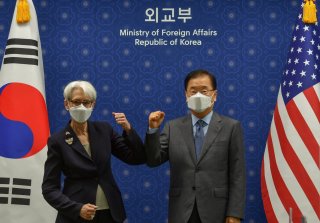 It appears that South Korea has formally reached the status of a middle power as of 2021. Militarily, it ranks sixth in the world, and economically, it is estimated to be one of the ten largest economies, which is further bolstered by the United Nations Conference on Trade and Development categorizing it as a developed economy. South Korea’s material rise as a middle power has not gone unrecognized globally and by the United States. In the international realm, President Moon Jae-in’s first summit with President Joe Biden in May was a testament to the United States’ tacit recognition of South Korea as a formidable middle power as Biden sought economic investment from South Korean conglomerates and South Korea’s affirmation of the U.S.-led rules-based order amid intensifying US-China competition. Three weeks later, President Moon was at the G7 summit in Cornwall following Britain’s invitation. Culturally, South Korea’s films, music, and celebrities have been receiving unprecedented recognition and accolades.

But herein lies the question on whether South Korea’s all-around achievements as of 2021 are fungible such that Seoul’s influence is projected in the highly status-quo oriented realm of diplomacy and international security. It is one thing to have material capabilities, but another to be able to exercise power and influence in desired ways. And South Korea’s international political and diplomatic clout has yet to commensurate with its material standing.

South Korea’s newly found middle power status was achieved solely through it passively benefitting from the existing order led by the United States. As it rose through the ranks in democracy, military, and economy, South Korea adopted a middle power identity but only nominally, using this status only for its national interests. An example is its attempt to multilateralize the “comfort women” issue and reframe it as an international women’s rights agenda.

South Korea’s half-hearted passive middle power status comes with a hefty price of being labelled a dissatisfied middle power. This has led to less autonomy, especially when it comes to South Korea’s relations with China and North Korea policy which is usually seen as challenging American interests in sanctions and human rights. But the concept of “middle power” is ideology-based and not politically neutral. To maintain its middle power status, South Korea should support the status quo, but more importantly, it must do it proactively.

Traditional Western middle powers like Australia and Canada gained their middle power status because of internal and external factors. Internally, they acted like international middle powers by proposing multilateral solutions and mechanisms like the International Criminal Court and the Asia-Pacific Economic Cooperation and also actively supporting U.S.-led multilateral initiatives such as during the first Gulf War. Externally, they took advantage of the changing international order at the end of the Cold War that presented them with opportunities to not only behave like middle powers but to also increase their international visibility that earned them recognition from the United States and the West.

It is still too early to tell, but Covid-19 has contributed enough to disturbing the existing order such that the United States currently needs followers to gain a legitimacy advantage over China. South Korea can increase its international clout by doing more than reaffirming support for the U.S.-led order during this transition. It can start acting like a true global middle power and increase its international presence and visibility as a middle power by “giving” more to the international community. With the possibility of the current pandemic becoming endemic, South Korea has plans to capitalize on itself as a potential vaccine manufacturing hub. Instead of pursuing it with a nationalist perspective, it could, and it should, expand and transform this plan into a regional or global multilateral cooperative mechanism to address a greater variety of global health security issues with the interests of the international community in mind. Only by giving can South Korea get more (influence), and there is no better moment than now.

Minseon Ku is a Ph.D. student in Political Science (International Relations) at the Ohio State University.