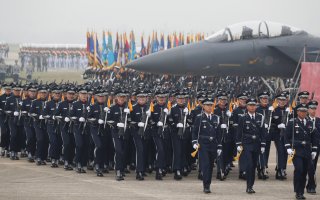 South Korea’s military spending is significant by world standards, and has grown rapidly under the Moon Jae-in administration even while rapprochement with North Korea remains a priority. Although the rise in defence spending might be interpreted as a response to the North’s expanding nuclear capabilities and other regional threats, a deeper look suggests it might have more to do with internal dynamics and South Korea’s US alliance.

South Korea will spend more than 80 per cent of its 100 trillion won (US$91.9 billion) defence budget for the next five years on locally made weapons instead of imports. President Moon’s push for military spending may seem paradoxical in light of his efforts to improve relations with North Korea, yet South Korea’s liberal leaders have all generally increased defence spending with an emphasis on military modernisation. This is partly because they face more pressure than conservatives to display their commitment to defence, but there is also a deeper, more entrenched ideology that undergirds South Korean leaders’ order of priorities and ideas on spending.

During the Cold War, in response to threats of North Korean aggression and a withdrawal of US support, the Park Chung-hee government (1961–79) prioritised security independence through domestic weapons production. This doctrine of self-reliant national defence (chaju kukbang) has since been adopted by every presidential administration and defence budgets have steadily increased. Even former South Korean presidents Kim Dae-jung (1998–2003) and Roh Moo-hyun (2003–2008) — liberal critics of Park’s authoritarianism and deep believers in North Korea engagement — continued and reinvigorated chaju kukpang by supporting domestic defence manufacturing.

President Moon’s quest for defence autonomy is also driven by a desire for greater political autonomy in the US–South Korea alliance. As a US client state since its founding in 1948, South Korea has always relied on US military aid. This asymmetric alliance has limited Seoul’s leverage with Washington, and the latter has historically prevented the former from procuring the latest weapon technologies. For frustrated South Koreans in pursuit of chaju kukbang, the remedy has been to develop the domestic arms industry. US President Donald Trump’s push for South Korea to pay more for the alliance may have further motivated Moon’s domestic spending on weapons and research and development (R&D). In contrast, conservatives take a hard line against Pyongyang and seek to reinforce the US–South Korea military alliance to this end. Amid growing disapproval of Moon’s policy of engagement with North Korea, Moon has had to walk on eggshells to improve relations with Pyongyang without jeopardising national security or falling out with Washington.

President Moon has also sought to accelerate the transfer of wartime operational control (OPCON) from Washington to Seoul. With South Korea’s Defense Reform Plan 2020, launched in 2006, former South Korean president Roh established a timeline for OPCON transfer, but the process was deferred under the two conservative administrations that followed. Moon resuscitated Roh’s efforts and put forward a schedule for Seoul to assume wartime OPCON by the end of his administration in 2022, boosting domestic defence purchases to help meet this timeline. Though OPCON transfer during Moon’s tenure now seems unlikely, his efforts may be a step towards disentangling South Korea from US foreign policy over the long run, as an increasingly confident South Korean middle power emphasises its defence ownership.

South Korea also has a long-term interest in promoting domestic defence manufacturing as an engine for export growth, particularly as the Moon administration struggles with other areas of economic policy. This high-tech industry has benefited from South Korea’s impressive efforts over the past two decades to improve R&D and gain a bigger slice of the global technology market. Civilian innovations have facilitated upgrades in military technology, prompting the government to offer expanded support for businesses specialising in IT and weapons-related R&D. South Korea is also a major player in areas such as artificial intelligence, big data and 3D printing, and is among the top arms exporters worldwide. These industries will be critical for the country as it seeks to rebuild its economy post-COVID-19.

Despite contentions that his liberal approach towards the North has compromised national security, Moon’s national security doctrine is quite recognisable and in line with South Korea’s defence policy for the last fifty years. Strengthening the country’s defence industry has significant implications beyond the military; Moon is forging a path towards greater political autonomy and economic revitalisation.

Peter Banseok Kwon is Assistant Professor of Korean Studies in the Department of East Asian Studies at the State University of New York at Albany.