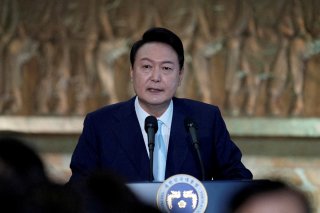 The fast-spreading monkeypox virus has reached the Korean Peninsula.

After confirming its first case of the monkeypox virus on Wednesday, South Korea pledged to strengthen monitoring and response systems as it boosted the alert level to “caution” for the disease.

The Korea Disease Control and Prevention Agency (KDCA) said that the infected patient, who arrived at Incheon International Airport from Germany on Tuesday afternoon, has been in isolation treatment at Incheon Medical Center, west of the capital city of Seoul.

According to Yonhap News Agency, the individual reportedly had a headache two days before departing and showed symptoms of a fever, sore throat, lethargy, and skin lesions when arriving in the East Asian country. An epidemiology survey revealed that the person did not have any high-risk associates, meaning family members or anyone who had regular or sexual contact within the past twenty-one days.

The KDCA added that it was actively monitoring the health conditions of passengers who sat near the patient during the flight.

Meanwhile, newly elected President Yoon Suk-yeol called for stronger measures against the inflow of the monkeypox virus. He instructed health authorities to strengthen quarantine measures for foreign arrivals and to thoroughly monitor the possibility of additional cases.

Yoon told health authorities “to be fully ready to swiftly deploy the available vaccines and treatments to the medical frontlines and to complete the introduction of third-generation vaccines and antiviral treatments against monkeypox as soon as possible,” a presidential official told reporters, per Yonhap.

According to the World Health Organization (WHO), there have been more than 2,500 monkeypox cases globally to date, including one death. Cases have been reported in forty-two countries in five global regions, but more than 80 percent of them have been in the WHO European Region.

“We are removing the distinction between endemic and non-endemic countries, reporting on countries together where possible, to reflect the unified response that is needed,” the WHO said in a recent report.

The recent surge in monkeypox cases is unusual due to the fact that they are occurring in North American and European countries where the virus is not endemic. Monkeypox is generally found in Central and West African rainforests, where animals that carry the virus live.

Monkeypox is a viral illness that begins with flu-like symptoms and the swelling of lymph nodes, eventually progressing to rashes on the face, hands, feet, eyes, mouth, or genitals that turn into raised bumps which then become blisters. The virus, which has been shown to be transmissible for up to four weeks, is most easily spread via open contact with the sores of an infected individual. It can also spread through contact with materials that have the virus on them.