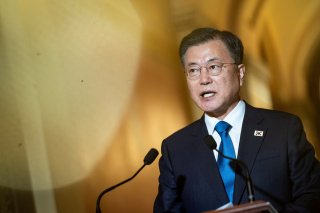 Ever since the coronavirus pandemic began, North Korean officials have claimed that its citizens have not been infected by the virus. But at the same time, the nation has taken mitigation members, sometimes stringent ones. Meanwhile, North Korea is facing a known starvation crisis.

Recently published analysis indicates that North Korea does not have a coronavirus mitigation strategy, with Pratik Jakhar of BBC Monitoring noting in an op-ed published by Foreign Policy that Kim Jong-un’s regime appears in no hurry to vaccinate its population.

“News of countries vaccinating their people or life returning to normal is rarely, if ever, transmitted within North Korea, perhaps over fears that it might trigger resentment against the regime for its failure to secure shots,” Jakhar wrote in his op-ed. “In contrast, the propaganda apparatus has been unusually quick to report on cases rising abroad and the spread of COVID-19 variants.”

Now, there’s a new report that South Korea is offering to cooperate with North Korea on cooperation.

According to NK News, South Korean president Moon Jae-in has made another pitch to cooperate with the North on coronavirus mitigation. The pitch from Moon came in his speech on the occasion of the seventy-sixth anniversary of Korea’s independence from Japan. It involves inviting North Korea into the Northeast Asia Cooperation Initiative for Infectious Disease Control and Public Health. That initiative currently consists of South Korea, Japan, China, Russia, Mongolia, and the United States.

Per NK News, the objectives of the Cooperation Initiative include “information sharing, shared stockpiling of medical supplies and joint training of COVID-19 response personnel.”

“The Initiative proposed by President Moon Jae-in in his keynote speech at the UN General Assembly in September is a regional cooperation initiative aimed at strengthening joint response capacity among regional countries that are geographically close to each other and carrying out robust people-to-people and material exchanges, in response to transboundary health security crises including COVID-19 and the emergence of other new infectious diseases,” according to a South Korean government document from last December.

“It is clear that the COVID-19 threat is not temporary, which makes [the initiative] even more important,” Moon said in the speech. Moon had proposed welcoming North Korea into the initiative back in March.

Moon, who is set to leave office next May, also called for reunification between the two Koreas.

“For us, division is the greatest obstacle to our growth and prosperity and a tenacious barrier that obstructs permanent peace,” Moon said in the speech. “We can also remove this barrier.”