South Korea 'Probably Doesn’t Like Us Too Much'? That’s Just Not Correct. 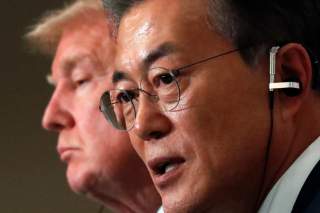 At a political rally in Florida on May 8, President Donald Trump went on a riff about an unnamed country—clearly South Korea—that he believes does not adequately share in the costs of its military alliance with the United States.

The quote: “[We] lose $4.5 billion to defend a country that’s rich as hell, and probably doesn’t like us too much. Can you believe it?”

Leaving aside a debate on the merits of the $4.5 billion figure—which is expansive, imputing expenditures for offshore military assets not based on Korean soil—the notion that South Korea is somehow a free rider on the U.S. military presence on the Korean peninsula, where 28,500 American soldiers are stationed, dates back to Trump’s 2016 campaign. South Korea now pays about half the cost of hosting U.S. troops on its soil and it does not charge the U.S. Army rent.

This arrangement is mutually agreed upon and has been renegotiated on a multi-year basis—until this year’s which lasts for only one year. Renewal will be contentious because of the Trump’s administration’s expansive view of burden sharing, but it should take into account South Korea’s contribution of more than 90 percent of the nearly $11 billion cost to expand Camp Humphreys—the largest overseas U.S. military base. It should also be mentioned that the U.S.-South Korean alliance plays an indispensable role in maintaining peace in Northeast Asia. That peace accrues enormous economic and security benefits to the United States itself.

What is more surprising than the reemergence of this free-rider theme (it never really went away) is the statement that South Korea “probably doesn’t like us very much.” This is not just incorrect; it is ahistorical.

Since the armistice that halted hostilities in the Korean War nearly sixty-six years ago in July 1953, the two allies have developed a deep and enduring partnership. It is one of the closest and most strategically important of any that the United States maintains. There is a strong sense in both countries of shared values and appreciation for their mutual prosperity.

In particular, support from the Korean people for the U.S. military presence remains high. The Asan Institute and the Council on Foreign Relations conducted a joint survey of Korean attitudes in January 2019 that showed continued strong backing across every cohort within Korean society for U.S. Forces Korea (USFK) as “a reliable partner in assuring South Korea’s security.” Three out of five surveyed said the continued USFK presence on the peninsula does not threaten peace negotiations with North Korea. A majority of South Koreans even think that current USFK levels should be maintained for the time being.

More generally, polls have shown that the populations of the two countries are among the most mutually-admiring in the world. In 2017 the Pew Research Center found that 86 percent of South Koreans had a favorable view of the American people, tied with Vietnam for the foreign populace with the highest opinion of Americans. Interestingly, that is the same percentage of U.S. responders who viewed their own fellow citizens favorably.

On the economic front, South Korea’s extraordinary postwar renaissance has seen it develop into the world’s eleventh largest economy and America’s sixth-largest goods trading partner, although its per capita income is only about half that of America, so not quite “as rich as hell.”

Nonetheless, South Korea’s globally competitive companies pay dividends for the United States in a multitude of ways. For example, according to the U.S. State Department, South Korean foreign direct investment in the United States has nearly doubled since 2011 from $19.7 billion to $38.8 billion in 2016, making the Republic of Korea the second largest Asian source of FDI into the United States. And just last week Lotte Chemicals opened a $3.1 billion complex in Louisiana, which that state’s Economic Development office estimates will result in more than 2,500 local jobs.

There is no question as to whether South Koreans “like us.” They do.

Thomas Byrne is president of the nonpartisan Korea Society and formerly the regional manager for sovereign risk in Asia-Pacific and the Middle East for Moody’s Investors Service.