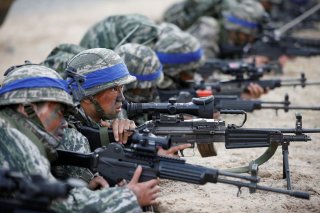 In response to North Korea blowing up an inter-Korean liaison building on Tuesday, South Korea’s military deployed tanks and other heavy equipped to the border and warned they would “strongly respond” if necessary. Since the beginning of June, North Korea has made a number of provocative threats including severing all contact with South Korea, and now South Korean President Moon Jae-in has shown a robust readiness to deter any further offensive action from the North.

“The government expresses strong regret over North Korea’s unilateral detonation of the inter-Korean liaison office building,” South Korea’s deputy director of the national security office, Kim You-geun told western media. “We sternly warn that we will strongly respond to it if North Korea takes any action.”

Seoul had spent $8.6 million to refurbish the joint liaison office, which had been used to help the two sides communicate even as North and South Korea have technically remained at a state of war since 1950.

After this latest setback, South Korea’s military has reportedly deployed tanks near the demilitarized zone—which stretches across the entire peninsula. While the exact type of tanks and armored vehicles—or even the total numbers—haven’t been stated, it is likely that these could include the domestically-produced K2 Black Panther, which is built and sold by Hyundai Rotem, an affiliate of the Hyundai Motor Group.

The Korean armored vehicles have been considered to rival other western-produced main battle tanks (MBT) and have been exported to partner nations including Poland. The tank, which has a crew of three including the commander, gunner and driver, is equipped with an auto target detection and tracking system, as well as a hunter killer function.

Its main armament is a 120mm L/55 smoothbore gun with automatic loader, which ensures the loading of projectiles even when the tank is moving on uneven surfaces. It has a reported rate of fire of about 10 rounds per minute. Secondary armament of the K2 includes a 12.7 heavy machine gun and a 7.62mm machine gun.

The K2 MBT has a nuclear, biological and chemical (NBC) protection system, while it is fitted with Composite Amor and Explosive Reactive Armor (ERA). The tanks active protection system was designed to address anti-tank rockets and missiles and includes soft and hard kill systems. In addition, the tank’s compartment is equipped with a blow-off panel that is meant to protect the crew from the explosion of ammunition.

Mass production of the Black Panther began in 2013 and the first K2s were deployed with the Republic of South Korea’s military in June 2014. Currently South Korea fields about 100 of the K2 tanks, while 106 are in production with an additional 54 planned.

While that would seem to be a reasonable amount of tanks for a nation the size of South Korea, given the political situation the country’s military still has a large force of K1A2 MBTs as well—and earlier this year the Ministry of National Defense (MND) announced plans to further improve the performance of those tanks. Those updates and improvements of the domestically-built tank began in 2014 and had been scheduled to continue until 2026.

In addition to its domestically-built tanks, South Korea also operates more advanced Russian tanks than does the North Korean military. As The National Interest previously reported, “This situation came about in the 1990s after Russia inherited a $1.5 billion debt to South Korea. A deal was made: Russia would give many items of then top-of-the-line military equipment, in exchange for South Korea canceling 50 percent of Russia’s debt. Interestingly, this included the T-80U Main Battle Tank.”

While the T-80U lags behind the Korean-made tanks and has been kept in a relatively stock configuration, it was the most advanced tank on the Korean Peninsula when it first arrived. The 33 T-80U and two T-80UK tanks are being phased out—but should actual fighting commence on the peninsula it is likely those tanks will be sent to the front line to join the more modern South Korean built MBTs.