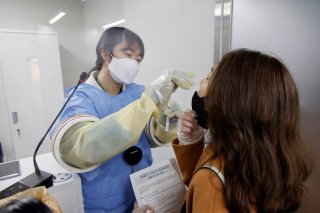 South Korea is facing a rising number of COVID-19 cases from the Omicron variant after being lauded for containing the virus early in the pandemic. Yonhap News Agency reported on Friday that South Korea set a daily caseload record by registering more than 260,000 cases, according to the Korea Disease Control and Prevention Agency (KDCA). Case numbers could soon rise even higher.

Just a day before, there were 198,803 cases, which was slightly down from Wednesday when the nation initially surpassed 200,000 cases. It was in mid-February when South Korea exceeded 100,000 cases for the first time.

The Korea Herald reported last week that South Korea decided to shorten curfews on cafes, restaurants, and other multi-use facilities by one hour to 11 p.m. despite the rising caseload. The size limit on private gatherings remains at six. The new curfew will be effective until March 20.

“The government took into consideration the prolonged and worsening hardship of business owners and small merchants despite a series of government compensations and partial easing of social distancing,” interior minister Jeon Hae-cheol said, according to Yonhap.

In addition, earlier this week, the government suspended the vaccine pass system for eleven types of public facilities, which include restaurants, cafes, department stores, movie theaters, and museums nationwide. Under the system, people were required to show proof of vaccination or a negative PCR test to enter the businesses or facilities.

Health minister Kwon Deok-cheol said that the government needed to ease the vaccine pass system for these facilities due to the low chance of viral transmission, especially if all individuals are wearing face masks.

According to the Korea Times, some have speculated that the lowering of restrictions while daily cases are rising essentially amounted to the government giving in to pressures from small businesses that have suffered due to the ongoing pandemic. Experts say many of their votes are still up for grabs in the March 9 presidential election.

However, the Health Ministry deflected such allegations during a COVID-19 response briefing on Friday.

“We made the decision (on the adjustment of the social distancing measures) after careful deliberation, taking into consideration both the epidemiological situation and people’s livelihoods,” senior health official Lee Ki-il said.

He also said that the ministry was aware of the dangers associated with the relaxation of restrictions, but asserted that the decision was “inevitable considering the difficulties of small business owners.”

Choi Jae-wook, a professor of preventive medicine at Korea University, told the Korea Times that COVID-19 restrictions should remain in place.

“Following the hundreds of thousands of new infections, critical cases and deaths will continue to surge,” he said. “In order to minimize fatalities, the government should wait at least until the current wave reaches its peak before making further decisions.”