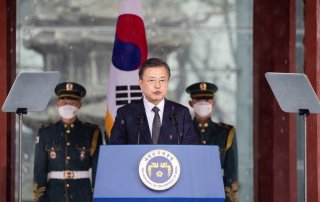 The country was ravaged by war. Seoul changed hands four times. South Korean civilian casualties were in the hundreds of thousands. Destruction was widespread with massive numbers of people driven from their homes. An estimated 650,000 North Koreans fled south and had to be integrated into a society badly malformed by war. For years the South remained materially poor and poorly governed.

However, Syngman Rhee’s 1960 ouster led to the ascendency of Gen. Park Chung-hee. The latter’s brutal political rule nevertheless yielded rapid economic growth and dramatic social change. Democracy took another quarter-century to arrive, but presidential elections finally were held in 1987. South Korean politics remain tempestuous—the last two presidents have been imprisoned for misconduct while their predecessor committed suicide in response to corruption charges. Nevertheless, the ROK has developed into a free and prosperous society.

Yet the South remains remarkably reluctant to trust its people to learn about North Korea. The 1948 National Security Law was written by the authoritarian Rhee government and routinely deployed by succeeding military regimes. Seoul banned “praising, encouraging, or propagandizing” on behalf of the DPRK, an expansive restriction that was broadly applied. For instance, travel to the Democratic People’s Republic of Korea was barred.

When the internet arrived South Koreans were prevented from visiting North Korean websites and blog posts were routinely deleted for “praising North Korea and denouncing the U.S. and the government.” The government charged people who retweeted pro-North Korean messages. The authorities even blocked a European website that discussed the North.

However, traditional information sources were not neglected. The New York Times reported on the 2007 case of bookseller Kim Myung-soo, who was arrested and “told his crime was ‘aiding the enemy’ by running a web site that sold used books deemed pro-North Korean. These included a biography of Karl Marx and ‘Red Star Over China,’ an account of the birth of Chinese Communism by the American journalist Edgar Snow.” Curiously, the same books were available in libraries.

Prosecutions waxed and waned depending on the incumbent president’s politics, but access to information and freedom of speech were consistently limited. The specter of a democracy warring against the essential characteristics of an open society led the United Nations Special Rapporteur on the Promotion and Protection of Freedom of Opinion and Expression to criticize the legislation. In 2010 Frank la Rue visited the ROK, observing: “For the Republic of Korea to be a leader internationally, it must show its commitment to a truly democratic model of governance with full respect for human rights.”

However, the policy remained unchanged. A decade ago satirist Park Jung-Geun received a suspended prison sentence for mocking North Korean propaganda. In 2015 Seoul deported Korean-American Shin Eun-mi for writing and speaking about her tourist travels to the North. The claim that her activities threatened ROK’s national security was evident nonsense. The government of one of the world’s most important and successful nations exhibited a shocking fear of exposing its people to information freely available throughout most of the world. Seoul even prosecuted a college professor for assigning excerpts of the memoir of Kim Il-sung, North Korea’s founder, to his students. He received a suspended sentence.

The scandalous government restrictions persist. The latest contretemps occurred last month when a publisher began selling Kim’s eight-volume With the Century. North Korean works are not known for their soaring prose and captivating plots. The likelihood of millions of South Koreans devouring the work and converting to communism seems slight. However, under government pressure bookstores stopped selling the work.

The ROK should be more confident in its achievements.

Last year the government-dominated National Assembly infamously banned South Koreans from sending materials critical of the DPRK into the North, but that was maladroit appeasement of the Kim Jong-un regime. The Moon government foolishly aided Pyongyang, which is desperately seeking to keep North Koreans isolated from the rest of the world, in a misguided attempt to keep the peace.

In contrast, the National Security Law aims to keep South Koreans ignorant of the North. Ironically, that approach mirrors the DPRK’s efforts to limit information about the ROK. Of late Kim has gone to great effort to seal the border, crack down on access to South Korean culture, and target North Korean youth for “anti-socialist” activities including “exotic lifestyles,” that is, mimicking those in the South. Two teens were recently sent to a labor camp for engaging in these behaviors, which are viewed as akin to sedition. The main difference between the systems, it seems, is that Kim doesn’t require a formal National Security Law to act.

Infantilizing the South Korean people always was a losing game for Seoul. Of course, such controls were unsurprising when the ROK was authoritarian, almost as willing to ban information and imprison critics as was the North. Yet Seoul’s desperate attempt to keep its people ignorant always was counterproductive.

First, Seoul undermined its case against the DPRK. The legislation operated as evidence of guilt, suggesting that South Korea’s rulers were afraid their people would learn the unpalatable truth that the ROK’s rival was better, freer, and richer. Of course, the latter wasn’t the case. However, it was the natural conclusion for an already oppressed people who were prevented from seeking the truth. Being told by Park Chung-hee’s dictatorial government that Kim Il-sung ran a dictatorial government was never as convincing as learning the truth from other, more trustworthy sources.

Second, the ban on information on and contact with the North gave the Kims’ purported paradise an exotic allure. Those disenchanted with U.S.-backed military rule in the ROK could imagine a better alternative, that lived up to its claim to be the legitimate representative of the entire Korean peninsula. Some democracy activists on the left desperately hoped that the DPRK, at least, lived up its promises.

South Koreans are less likely to be similarly bewitched today. Life in the South is much improved and knowledge of the North is much-expanded, especially with the testimony of manifold defectors. Indeed, forbidding access to information about North Korea seems particularly perverse as the Moon government desperately attempts to initiate better relations with Pyongyang.

What possible gain is there for Seoul to prevent South Koreans from being masochists and reading eight volumes of Kim Il-sung praising himself? Why should the ROK’s people be forbidden to do what Japanese, Americans, Europeans, Australians, Russians, Indians, Africans, South Americans, Chinese, and just about anyone else on earth can do if they suffer from chronic insomnia, read the Kim fairy tales taught to the North Korean people? Why should a vibrant democracy treat its citizens as children without having to present even a vaguely plausible justification?

Seven decades ago the ROK was fighting for its survival. Since then South Koreans have not only succeeded but thrived. However, Seoul has not abandoned some of the worst behaviors of that once desperately poor and unfree state. With a government on the left enjoying strong backing from the National Assembly, President Moon should reform the National Security Law and free his people from arbitrary information restrictions created in and for a different era.