South Korea vs. North Korea: Who Has the More Powerful Military? 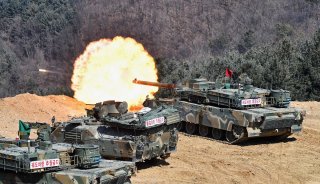 In the past, South Koreans believed that North Korea had the stronger military. The numbers have recently flipped, however, and a plurality now believes the South is stronger. Why opinion shifted, and what that means for policy, is uncertain.

A few years ago forty-two percent of South Koreans believed that the Democratic People’s Republic of Korea (DPRK) fielded the more powerful armed forces. Only thirty percent sided with the South’s military. A sizable gap prevailed through last November, but the outcome shifted dramatically in an April poll by the Korea Institute for National Unification. The South came out slightly ahead: 37.1 percent believed that the Republic of Korea’s (ROK) forces were more powerful, compared to 36.5 percent who saw the DPRK’s Korean People’s Army as being stronger.

Jina Kim of the Korea Institute for Defense Analyses called the result “surprising.” She noted: “Just this year North Korea announced that they will develop new types of weapons, test-launched cruise and short-range missiles.”

Indeed, shortly before the November poll, the North held a large parade that highlighted the North’s new intercontinental ballistic missile. Although it would not be used to target neighboring South Korea, it represented power lacking in the ROK. Kim Jong-un spoke to the assembled crowd of defense while showcasing offense: “We will continue to strengthen the war deterrent, the righteous self-defense means, so as to contain and control all the dangerous attempts and intimidatory acts by the hostile forces, including their sustained and aggravating nuclear threat.”

Even if these images might fade in South Korea by April, the North held another lengthy military parade in January. Pyongyang proudly described the highlight: “The submarine strategic ballistic missile, the world’s strongest weapon, entered the square in succession powerfully demonstrating the might of the strong revolutionary army with military and technological upper hand of the world.”

Nor did the DPRK offer any words of friendship for Seoul. Kim’s sister, Kim Yo-Jong, insulted South Koreans for watching the parade. Observers must be “shaking in their shoes,” she insisted. Without even a hint of conciliation from Pyongyang, in April South Koreans should have been more worried, even alarmed, than in November.

Of course, South Koreans are used to living with their dangerous neighbor. For most of the last seventy-three years the ROK has suffered through blustering, insulting, and threatening behavior.

Jina Kim told NKNews that South Koreans might have changed their opinion on the military balance because they were feeling better about the alliance with the United States: “South Korea has a combined defense system. So the strength of the U.S.-ROK alliance also influences the people’s trust in their military force.” She also pointed to increased talk about the South’s missile program.

These are all interesting, even plausible theories. Yet none are persuasive. The military alliance has survived radically different governments on both sides of the Pacific. Even Trump did not seriously impair the alliance, despite his splenetic comments and the difficult negotiations over the Special Measures Agreement. Nor did the South Korean public appear to be particularly concerned about the status of the alliance: the majority opposed paying significantly more even while supporting the relationship.

South Korea’s missile development pales in extent and importance compared to the North’s efforts. It will take time for Seoul to take advantage of the recent decision to lift range and weight limits previously set by Washington. As for recognition that the DPRK’s problems undermine its military effectiveness, that is ancient history. Things might have gotten worse last year, but they already were worse in November.

Dongyoun Cho of Seokyeong University noted that few “domestic factors” changed between November and April. South Korean military outlays are up, but that was much debated before. Maybe there was more talk about the South’s qualitative military advantages, she suggested: “I think South Koreans are perhaps becoming more aware of the fact that the military is heading toward the field of artificial intelligence, automatic driving, pilotless planes, space and cyber. There’s an assessment that South Korea is ahead of North Korea in general, so that may have brought changes in perception on the military.” Yet that seems like inside baseball for the public, an esoteric factor unlikely to cause large numbers of people to change their opinions.

Beyond the issue of causation is the more important question of the impact of such a public opinion shift on policy. Does the change make it easier for the ROK to provide for its security?

South Koreans rightly fear the Korean People's Army. It is the world’s fourth-largest in terms of personnel. However, much of its equipment is old; its soldiers are neither in the best health nor the best trained. In sheer mass, it could do substantial damage, especially in a push on Seoul, which is only thirty or so miles from the border. The air force would not last long, but the navy displayed some dangerous capabilities with the 2010 sinking of the ROKS Cheonan. Artillery and Scud missiles could target Seoul even now. Much more damaging would be the DPRK’s presumed ability to use nuclear-tipped missiles against South Korea and beyond.

The ROK certainly should be able to defend itself against the North. With more than fifty times the economic strength, a vast technological advantage, and twice the population, South Korea could build a military of the size and capability necessary to deter and, if necessary, defeat another North Korean invasion. There is no need for Seoul to accept military inferiority of any kind.

Rather, the South’s lagging capabilities reflect its reliance on the United States. The more the ROK offloads responsibility for its defense, the less it will do for itself, leaving its forces less capable vis-à-vis Pyongyang. And then South Korea will be more vulnerable since Washington will put its own interests first in a crisis and pressure Seoul to conform to U.S. priorities. Moreover, the latter are likely to change dramatically once North Korea gains, or is believed to have gained, the ability to target the American homeland, especially as the DPRK’s arsenal grows. At that point—the Rand Corporation and Asan Institute figure the North could have two hundred nuclear weapons by 2027—Washington would be reluctant to fight even a conventional conflict on behalf of South Korea since any conflict could end with a nuclear exchange and destruction of major American cities.

Comparing the capabilities of the two Koreas’ militaries isn’t easy given their radically different capabilities, especially the North’s possession of nuclear weapons. However, nothing substantial changed between November and April to justify the radical shift in South Korean opinion regarding the peninsula’s military balance. But that judgment doesn’t much matter so long as the U.S. is responsible for the ROK’s defense.

If Pyongyang’s nuclear program continues to expand, however, America’s commitment will necessarily become less certain. What U.S. president would be willing to risk Honolulu, Los Angeles, Chicago, and even, perhaps, Washington, D.C. and New York City, to defend Seoul? Then the South Korean people would have to not just assess the military balance but redress any weaknesses. That world is approaching faster than many people might imagine.