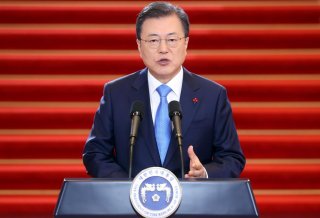 Back during the Cold War, the leaders of the United States and Soviet Union famously communicated using a special hotline. It was known colloquially, at least on the American side, as “the red telephone,” although the communications device was actually neither red nor a telephone.

Now, the government of South Korea is planning a modern-day version of that communications tool, a “special room” that will be used for video-chatting for high-level discussions with North Korea. It will feature such technologies as “‘high-quality, full HD’ cameras, four ninety-eight-inch LED displays, booths for simultaneous interpretations as well as a system that allows Seoul to ‘use a separate network to communicate with a remote area.’”

According to a report by NK News this week, the government of South Korea is seeking to spend 398 million won (the equivalent of $361,945) on a new video conferencing room, which “will be added to the inter-Korean dialogue headquarters in the Jongno district of Seoul.”

“The reason why we have decided to build the video conference room is to preemptively prepare for inter-Korean conferences that do not require physical contact,” the Unification Ministry told the news outlet.

The new room is expected to be finished by the end of April. There are not currently any concrete plans for the governments of the two Koreas to have any meeting.

The report comes after the president of South Korea, Moon Jae-in, announced that he would meet with North Korean president Kim Jong-un, “anytime, anywhere.” The room, however, was in the works prior to Moon’s speech, NK News said.

The Unification Movement is the agency of the South Korean government that handles relations with North Korea. According to a report last September by The Diplomat, after a South Korean man was killed at sea in North Korea, it was revealed that “the Unification Ministry has no official channels to contact the North to check and demand an explanation.”

This followed, last June, North Korea cutting off all communication channels between the two Koreas. North Korea, according to the same report, “blew up the joint inter-Korean liaison office at the Kaesong Industrial Complex.”

The news follows the completion of North Korea’s 8th Congress of the Workers’ Party of Korea, where Kim Jong-un reportedly given the new title of “General Secretary” of the Workers Party, a title previously held by his father and grandfather when they led North Korea.

Meanwhile, policy towards both Koreas is likely to get a shakeup with the change in presidential administrations in the United States. President-elect Joseph Biden last week named Sumona Guha, a State Department veteran, as senior director for South Asia on the National Security Council.