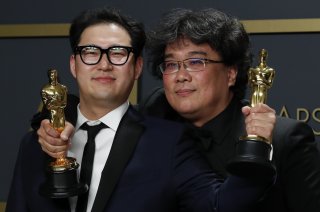 Even before the pandemic, and especially during the pandemic, there’s been a lot of discussion about theatrical windows—the question of how much time should pass between a movie’s theatrical release and its debut on streaming or other home videos.

Over the years, the windows have gotten shorter and shorter. When Netflix began making blockbuster movies, it would put them out in theaters three or four weeks before their arrival on the streaming service, causing movie theater chains to refuse to show those films.

Once the pandemic began, Universal released Trolls World Tour on video on demand at the same time as theaters, leading to threats of boycotts by the AMC chain, although the sides later reached a deal to reduce the window to seventeen days. And Disney began offering a concept called “Premium Access,” in which such movies as Mulan and this week’s Raya and the Last Dragon are released at home for a $30 premium, in addition to theaters.

And then, at the end of the year, AT&T’s WarnerMedia announced that it was releasing Warner Brothers’ entire 2021 slate simultaneously in theaters and on HBO Max. ViacomCBS, at the time of Paramount+’s launch, announced that it would reduce the windows for upcoming Paramount movies like the next Mission: Impossible film, forty-five days after it arrives in theaters.

Now, the collapsing window phenomenon has crossed the Pacific and will apply to an upcoming South Korean film.

According to Variety, the South Korean company CJ ENM has announced that the upcoming film Seobock, described as “one of the year’s hottest Korean movies,” will be released simultaneously in theaters and on the streaming service TVing. Both releases are set for April 15. The film is directed by Lee Yong-joo and stars Gong Yoo. Yoo plays “an intelligence agent charged with transferring the first human clone from a laboratory to a safe place in the real world.”

The film had originally been set for release in December but was delayed due to the pandemic.

“Considering the pandemic crisis, CJ ENM and stakeholders including rights owners have conducted a thorough discussion and concur with the decision that it will be a good opportunity to introduce the film to the audience in as many ways as possible,” a company spokesperson told Variety. “Creating top-notch original content and maximizing its audience and financial values as much as we can through distribution strategy is CJ ENM’s top priority.”

It’s been a big few years for South Korean cinema, with Parasite last year becoming the first foreign-language film to win the Academy Award for Best Picture, and Space Sweepers—dubbed the first South Korean space blockbuster—becoming a hit when it was released on Netflix last month.

It’s not clear if Seobock will get a release in the United States.