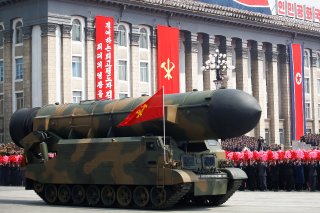 North Korea abandoned its previously pledged moratorium on nuclear tests or long-range missile launches this year, even announcing a nuclear first-use doctrine, implying its nuclear arsenal is for offensive purposes against Washington and Seoul. As North Korea now clarifies that its nuclear weapons are not explicitly defense weapons, five things have become very clear. First, North Korea is capable of nuclear strikes. Second, the Kim Jong-un regime will never be willing to denuclearize. Third, South Korean liberals’ appeasement policies, which benchmarked the Sunshine Policy, have failed. Fourth, the Korean Peninsula is facing its worst security crisis in decades. And finally, a nuclear arsenal is a cost-efficient deterrent that overwhelms other weapon systems.

If this regional security trend continues, the most important and highly likely possibilities are that Pyongyang, a nuclear-armed regime that is not internationally recognized as a nuclear power, will continue to ignore non-nuclear South Korea and that Seoul will suffer if it operates under the false hope that it will be protected by U.S. extended deterrence. Even though South Korea has become one of the leading economic and military powers, the country cannot escape from worsening inter-Korean relations as long as it pursues the unrealistic goal of having military superiority over a nuclear-armed regime.

South Korea has been developing three offensive and defensive strategies: Kill Chain for preemptive strikes; Korean Air Missile Defense (KAMD) for ballistic missile interception; and Korean Massive Punishment and Retaliation (KMPR) for the elimination of the North Korean leadership. All of these strategies were mentioned by newly-elected President Suk-yeol Yoon, who believes those three systems under his new Strategic Command would overwhelm Kim’s nuclear-tipped missiles. Given its neighbor’s increasing military power, however, Seoul’s strategic focus on conventional forces is neither desirable nor cost-efficient to deter North Korea and China, especially as Pyongyang is expected to forward-deploy tactical nuclear weapons in the near future. It is reasonable to doubt whether sticking to conventional weapons to protect itself from nuclear missiles serves Seoul’s best security interests.

In case of a security crisis, North Korea would be strongly tempted to use nuclear weapons in order to compromise Seoul’s superiority in conventional firepower. Of course, U.S. forces will retaliate in return, as agreed on in the ROK-U.S. Mutual Defense Treaty, but it runs the risk of being trapped by the classic principle of Mutually Assured Destruction (MAD). Pyongyang could hold the U.S. mainland and Americans hostage by threatening to strike U.S. population centers, leading to a chaotic outcome on the Korean Peninsula. Facing the enemy’s nuclear arsenal right above its head, conventionally-armed Seoul will be left with no options if the United States decides not to uphold its nuclear guarantees due to the expected damage from such threats or for political reasons.

Many South Koreans do not believe that Washington is willing to sacrifice innocent Americans as a cost of waging a war with far away North Korea. These were the very doubts the United Kingdom and France had before they went nuclear themselves. More importantly, the United States never created an equivalent of the nuclear planning group that Washington provides for NATO’s nuclear sharing strategy against Russia, only providing its East Asian allies with the show of power through its strategic assets.

It is quite normal that allies are not able to have full trust in the nuclear umbrella that they have never seen unfolded in war. This is the focal point with which non-nuclear-armed allies have had fundamental questions. America’s willingness to actively engage in intertwined Korean security affairs has gradually weakened since it withdrew tactical nuclear weapons from the Korean Peninsula in 1991, now providing South Korea and Japan with conventional weapons and missile defense systems like bombers and aircraft carriers as guaranteed extended deterrence. Notwithstanding such a show of power, the North Korean regime did not even flinch. Pyongyang dauntlessly chose to expedite its nuclearization, delivering a message that extended deterrence is not as effective as we expected.

Taking a firm stand against Kim Jong-un’s nuclear threat requires flawless dependence on the alliance’s nuclear umbrella, but the concerns and doubts about U.S. extended deterrence have not been addressed, especially now that North Korea’s intercontinental ballistic missiles (ICBMs) could now reach the U.S. mainland.

China and Russia are not reliable enough to expect meaningful change from them, as they acquiesced to the North Korean nuclear problem and do not have a red line regarding Kim’s nuclear arsenal. It can be said that they are one step away from acknowledging North Korea as a de facto nuclear state—having given several green lights to nuclear tests and ICBM launches—because they perceive North Korea as a buffer zone to check the United States in the region.

The worst is that the two nuclear powers might grant immunity to Pyongyang's reportedly upcoming seventh nuclear test. Amidst the clash between the United States and the China-Russia bloc, Beijing and Moscow are predicted to veto any UN Security Council resolution to sanction North Korea. Importantly, China believes the time to dissuade North Korean nuclearization through military means has already passed. In this case, the long-standing non-proliferation principle of Washington would become less convincing, and the U.S. government would rather feel more need to arm its East Asian allies with nuclear weapons.

In the end, there is no choice but to face nuclear bombs with something equivalent. Kim’s family in Pyongyang has already given South Korea such justifications. Ironically, the inter-Korean nuclear balance collapsed after the Joint Declaration of the Denuclearization of the Korean Peninsula fell apart. That year, the United States withdrew all tactical nuclear weapons from South Korean territory, just as Pyongyang started its nuclear program. Since then, Kim Jong-un has resumed nuclear tests and ballistic missile launches. As North Korea violated all articles of the Inter-Korean Agreements of 1991 and the Joint Declaration, the denuclearization principle of the Korean Peninsula has already become an obsolete echo. The dead statement is no longer alive just because only one side respects it. South Korea and the United States should point out that North Korea completely broke it, and its program is no longer reversible. This will consolidate South Korea’s position to prepare for its own nuclear security strategy.

Unlike the point of view that South Korea will follow the precedent of sanctioned North Korea if it chooses to develop nuclear weapons, the two Koreas are totally different cases, as Seoul’s nuclear armament would be ignited by the possibility of nuclear use by North Korea. South Korea is under the imminent threat of Pyongyang’s atomic bombs, which have been illegally developed. As an exemplary country that has fully respected the international non-proliferation regime, therefore, South Korea should naturally have a right to protect itself and its American ally from northern threats.

It is not an issue for South Korea to leave the Non-Proliferation Treaty (NPT), as the treaty gives members the right to withdraw if they decide extraordinary events have jeopardized their supreme interests. North Korea’s illegal nuclear acquisition and threats to its neighboring states obviously fall under the defined “extraordinary events,” thus supporting the interpretation that Seoul’s nuclear program would be a rational and proportional response for the protection of its core security interests.

All members of the eastern bloc (Russia, China, and North Korea) possess nuclear arsenals, but the United States is the only nuclear-armed state in the Western bloc of East Asia. South Korea’s nuclearization will contribute to the balance of this uneven playground. Otherwise, the imbalance of nuclear forces will lead to the failure of U.S. Asian security policy, as both Pyongyang and Beijing enhance their nuclear capabilities without pause while Asian allies that only rely on the U.S. nuclear umbrella refrain from going nuclear.

Washington should move forward together with Seoul to pursue regional strategic stability and prevent the worst scenario through South Korea’s nuclear armament. The White House does not seem to be ignorant of this, and there will be an inevitable situation where the United States will have to propose nuclear development to allied states in Asia. If Seoul chooses to accept the proposal, the United States should back it up by focusing on the Chinese and North Korean nuclear programs. As arguments for the necessity of allies acquiring nuclear bombs gain traction in the United States, South Korea’s nuclearization would be more indispensable for American interests.

It will still be difficult to find the political determination and persuade the United States, but the option of going nuclear is easier than the complete denuclearization of North Korea, and the majority of Korean citizens are favorable to such a national initiative. A Chicago Council on Global Affairs public opinion poll released this year shows that 71 percent of Korean citizens favor acquiring independent nuclear weapons.

Despite this public support for nuclear armament, the North’s leadership looks down on Seoul by taking advantage of its nuclear weapons and the acquired connivance of China and Russia, well aware that South Korea is not firmly determined to acquire the United States’ approval for nuclearization. Both the United States and South Korea should understand that extended deterrence is merely a stopgap measure at this moment and that it could have been effective only if North Korea had not initiated a nuclear program or it remained in the early stages.