South Korea's F-35 Fighters Can Do Just About Anything 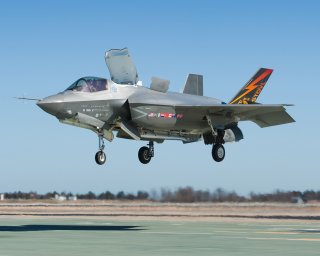 South Korea’s choice to acquire the F-35 Joint Strike Fighter will offer a visible deterrent to any kind of Chinese aggression in the Pacific theater, whether an incursion into South Korea itself or a potential Taiwan takeover. The U.S. alliance with South Korea is both long-established and very strong, making it increasingly likely that South Korea would respond quickly in the event of a large-scale conflict with China. South Korean support would be crucial to the prospect of intercepting and destroying any kind of Chinese amphibious or air attack against Taiwan or even Japan. Another key dimension of the U.S.-China conflict is that, according to Global Firepower 2021 military rankings, South Korea operates as many as several million reserve troops. This means that should South Korean F-35 fighters impede, weaken, or prevent an attack on Taiwan or Japan, Seoul would be positioned to reinforce its presence with a sizable ground army.

The merits and potential impact of South Korean F-35s are as impactful as they are self-evident. In recent years, South Korean F-35s have conducted theater sustainment and deterrence patrols with U.S. F-35 fighters. South Korea also offers a land base from which U.S. F-35As could take off in the event that there were not enough U.S. Navy F-35-armed ships within striking distance of a target.

Alongside the many reasons why South Korean F-35s could be extremely vital to deterring China, F-35 fighter jets also make sense in terms of countering the threat posed by North Korea.

Of course, South Korea has U.S. Army support and a large standing army itself, yet North Korea is known to have a very large army as well. Therefore, while the presence of a countervailing ground force certainly contributes to South Korean deterrence, air supremacy enabled by F-35s could prove decisive. Simply put, should North Korea think it might prevail in any kind of ground invasion across the demilitarized zone into South Korea, the presence of armed and stealthy South Korean F-35s could prevent an invasion. An invading North Korean force, perhaps even a larger or superior one, could quickly and easily be destroyed by F-35 fighters, as the North Koreans do not possess a fifth-generation aircraft or its equivalent. Targeting North Korean launchers is yet another impactful way South Korean F-35s could have a decisive impact. By establishing air supremacy over North Korea, South Korean F-35s could draw upon the aircraft sensors; data processing; and intelligence, surveillance, and reconnaissance (ISR) technology to locate and destroy North Korean ballistic missile launchers. This kind of possibility is extremely significant as North Korea is known to operate a very large number of ballistic missiles and likely uses mobile launchers.

The advantages associated with South Korean F-35s are compounded or increased by Japan’s multibillion-dollar F-35 buy as it enables networking, allied connectivity, and the possibility of joint warfare operations. Also, operating from a peninsula, South Korea could use land-launched F-35 stealth fighters to support maritime operations in the Pacific region in and around Japan.