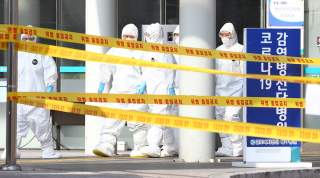 There was “panic” in the Binhai Yuntai neighborhood in Yantai in northeastern China. Two buses had pulled up outside the entrance to the community, and a group of onlookers watched.

“Koreans returned to the community,” one man said.

As the coronavirus crisis gets serious in South Korea and calms down in China, the dynamic between China and its northeastern neighbor has been reversed. When the epidemic first started, Koreans protested and petitioned to block Chinese from entering the country. Now there is fear of Koreans entering China. “Qingdao is dangerous! Koreans coming to China to flee danger,” a viral blog post warned.

In fact, most of the Koreans returning to China are students, workers, and entrepreneurs. (Every single person who was allowed to return to the Binhai Yuntai community, which is located in an area with a large Korean community, by definition, was a long-term resident of the community.) South Koreans are the largest expat group in China. Hundreds of thousands of Korean nationals live in China long-term, with most of them concentrated in the northeast and east coast. Qingdao, just 380 miles from Seoul by flight over the Yellow Sea, is home to 100,000 South Korean nationals, and Yantai, which is even closer, is home to 50,000 more. That is in addition to many ethnic Korean Chinese citizens.

Chinese citizens living in South Korea are also returning to China. On February 25, three Chinese women on Asiana flight OZ349 to Nanjing had a fever, resulting in 94 of the passengers sitting nearby having to be taken into a specialized hotel for isolation and observation.

Video filmed at Weihai Airport, which is 40 miles east of Yantai, shows the arriving passengers being grouped together and told that they will be put in self-isolation for between 7 and 14 days. They were told not to get too close to family members or other people. “Don’t touch, and don’t speak [closely]. … You must have read the news. You must have seen Douyin [Tik Tok]. You can understand.”

On February 29, the number of cases of coronavirus in Korea increased by over 800, bringing the total number of cases to over 3,100. The virus started spreading amongst followers of the Shincheoji church in Daegu, a city in the southern part of South Korea. The church, which has been described as a “cult,” holds services with thousands of worshippers sitting together on the floor.

One member, Patient #31, had 1,160 traced contacts with other people in the span of three weeks. She went to a Shincheoji social club in Seoul before returning to Daegu and attending services, crashed her car, went to the hospital, where she was found to have a fever and advised to be tested further, then left and went to a hotel buffet, before finally returning to the hospital and testing positive on February 17.

Now disinfectant teams are spraying down the whole city. People are debating in the press whether Patient #31 should face legal punishment. Campaigns for April’s legislative elections have been impacted, as The National Interest reported previously.

China is no longer the central focus of the blame. Sungeun Hong, an office worker in Seoul, said, “Because number 31 did amazing stuff, so people forget about China. Now they blame the religious group.”

Li Xu, a Korean who had studied then lived in China for close to a decade, left Xi’an to return to Korea when coronavirus started spreading. Now he plans to return to China.