To Successfully Denuclearize North Korea, Washington Should Make it Think Like South Africa 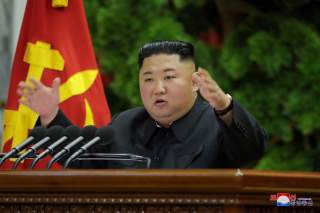 After Kim Jung Un declined to deliver on his promised “Christmas gift,” North Korea watchers are turning their attention to the New Year and the possibility of more than the usual fireworks display over Northeast Asia. In October, Pyongyang gave Washington a year-end deadline to make progress on bilateral negotiations before canceling a voluntary two-year moratorium on testing nuclear weapons and intercontinental ballistic missiles.

President Donald Trump’s negotiators and their South Korean counterparts are seeking to convince Kim to talk instead of test, but what they should be doing is recalling the lessons of a previous case of nuclear dismantlement. The 1991 decision by South Africa to abandon nuclear weapons shows that the regime in North Korea may not yet face adequate pressure to denuclearize.

Of ten total countries that have possessed nuclear weapons, only South Africa verifiably gave them up. The longtime holdout surprised the world when it announced it would sign the Treaty on the Non-Proliferation of Nuclear Weapons (NPT). Two years later, President F.W. de Klerk revealed that Pretoria had decommissioned six nuclear weapons, halted progress on a seventh, and dismantled his country’s nuclear weapons infrastructure and robust space launch and missile delivery programs.

South Africa’s unthinkable act followed a campaign of biting international sanctions and isolation. The international community’s target for transformation was not only Pretoria’s proliferation activities, which were an open secret, but overwhelmingly its oppressive apartheid policies.  By the late 1980s, the South African economy was in a deep financial and debt crisis. In 1974, the United Nations had suspended South African participation in the General Assembly, and in 1977, it passed a permanent international arms and military embargo.  Washington, long quiet on apartheid in favor of Pretoria’s stance against communism, eventually stepped up its own divestment and proliferation sanctions campaign, passing the Comprehensive Anti-Apartheid Act of 1986, resulting in major South African trade losses by 1987. That same year, the UN imposed an oil embargo.

Political breakthrough also perpetuated South Africa’s decision. While de Klerk belonged to the ruling party, his election in 1989 brought motivation and support for domestic reforms, as well as new judgments about the benefits of nuclear weapons. For de Klerk, nuclear weapons represented a “rope” around the neck of his vision of South Africa – one with full popular representation and at peace domestically, economically prospering through international engagement, and leading the African continent.

In addition, South Africa’s perceived security threat was eliminated. Pretoria’s initial nuclearization in the mid-1970s was the result of its entanglement in an obscure Cold War battleground. South Africa backed one side of a protracted civil war in Angola, pitting it against the pro-communist side supported by the Soviet Union. It eventually faced thousands of Cuban troops deployed to Angola war in support of Soviet aims. The Soviets were also heavily involved in independence movements in South African-controlled Namibia and the bordering state of Mozambique. South Africa thus feared a Soviet-backed invasion and devised a plan to make nuclear weapons and test one as a last-ditch deterrent. If deterrence failed, the thinking ran, at least the U.S. would be dragged in to negotiate the cessation of an invasion. Only when the U.S. helped broker a cease-fire in Angola in 1988, situations in neighboring countries stabilized, and Cuban troops withdrew, did Pretoria begin to view its nuclear deterrent as extraneous.

By contrast, North Korea’s political, economic, and security evolution is nowhere near South Africa’s, which helps explain why talks continue to fail.

The obdurate and totalitarian regime in Pyongyang has no interest in respecting the norms that would allow it to join the international community. Nor is it considering redressing domestic grievances, not least of which are rampant starvation of the populace, slave labor, and other vast human rights abuses, which quell any potential for a popular uprising. There are no “de Klerks” on the rise in North Korea. There is also no sign that Chairman Kim Jung Un would be able to carry through on denuclearization even if he truly wanted to.

North Korea’s security environment is also unlikely to improve, mainly because of its own hostility and aggressive military posture. Sixty-seven years after the end of the Korean War, U.S. troops remain on the Korean Peninsula as a deterrent against Pyongyang’s military provocations and threats to forcibly reunify the peninsula.  President Trump’s own contemplations of troop reductions may be stymied by Congress, and with good reason.  Risks are high in denuding allies of U.S. troop protection.

Assuming that Washington must negotiate with the current regime rather than count on its miraculous transformation or early demise, it should work to elevate denuclearization as a preferred policy choice among influential North Korean party, military, and political elites.

Since the U.S. needs to influence political thinking in North Korea via external drivers, given the unlikelihood of a grassroots evolution of the South African sort, it should launch a quiet information campaign through cyber operations and web-based influence – targeting not only those holding political power, but also military and party officials who regularly use the internet.  Influencers must be convinced not only that a better future exists without nuclear weapons, but that their power and livelihood is becoming less secure overall due to enhanced pressure.

In 2020, President Trump should also dial up a cohesive pressure front and show the regime that, try as it may, no available path to concessions and sanctions relief exists absent verifiable denuclearization.

To present a more unified front against Kim, Mr. Trump needs to promptly fix the fissures in his alliances with South Korea and Japan.  He should then call for a new UN Security Council resolution and additional sanctions designations.  If Russia and China disagree, as they likely will, the U.S. should spearhead an effort to more strongly enforce existing resolutions.  This must include unilateral U.S. sanctions of entities and individuals caught violating UN sanctions, which may get Russia and China to go along.  They and many other countries have used the relaxation of tensions to either provide assistance to North Korea or turn a blind eye toward Pyongyang’s sanctions-busting and revenue-raising activities.  In addition to evading sanctions, North Korea’s growing use of cyber-attacks and financial schemes, allow the regime to bring in enough income to maintain elite loyalty to the state, while building up its threatening nuclear, weapons of mass destruction, missile, and military capabilities.

While there is little hope of allaying Pyongyang’s paranoia, Washington should maintain cordial lines of communication, clearly signal its intentions, and state a willingness to resume (serious) dialogue.  Washington should only indicate that it is willing to relax its security posture and incrementally remove sanctions if Pyongyang commits to and progresses on a verifiable, swift denuclearization process.  It should encourage Seoul to continue confidence-building efforts with Pyongyang that do not violate UN sanctions.

America must recognize that if talks are not progressing, it makes sense to walk away.  Past U.S. diplomatic efforts with North Korea have been too willing to accept limited nuclear concessions with drawn out implementation, making agreements prone to collapse.  The absence of South Africa-style disarmament indicators in Pyongyang underscores the danger of relieving sanctions pressure by negotiating a deal that falls short of full denuclearization, which is Kim’s probable aim.  Short-term relief for narrow commitments allows the regime just enough room to contemplate surviving another year, another decade.  A partial deal also allows Chairman Kim to lock in gains that render his nuclear and missile programs much more difficult to touch in the future, and engenders further decay of the sanctions regime.

If Mr. Trump opts to augment the pressure on North Korea, he will need to patiently wait out attempts by Kim to scare the international community into concessions. He shouldn’t be shaken. The United States should instead keep tightening the rope that led South Africa to abandon nuclear weapons.

Andrea Stricker is a research fellow at the Foundation for Defense of Democracies where she conducts research on nonproliferation, Iran, North Korea, and other security policy topics.  Follow her on Twitter @StrickerNonpro.