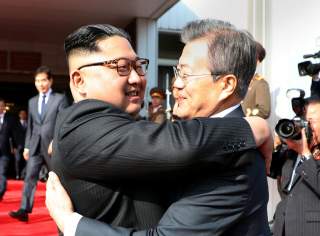 To look to North Korea’s future, one must turn to the past—the early 2000s. That’s when Kim Jong Il, the very much isolationist, funny-looking, second-generational North Korean dictator and the father of the international pariah-turned global statesman, Kim Jong Un, came out of his hardened anti-social shell. In 2000, Kim the Second lined up world leaders for a series of summit pageantries, thus undergoing a dramatic image makeover from an international pariah to a legitimate global leader. As is Kim the Third’s scheme today, Kim Jong Il’s outreach was a crafty attempt to reset the geopolitical chessboard. The aim was to transform himself from a mere neighborhood prowler into a globetrotting statesman and to shake down his expanded neighborhood for extortion money and time with which to build better bombs.

In May 2000, Kim Jong Il made his first visit to China since inheriting power in 1994. Likewise, in March 2018, Kim Jong Un made his first foreign foray outside his kingdom, six years after inheriting power, popping up in Beijing a month before his summit with South Korean President Moon Jae-In and two and a half months to go before his high-stakes meeting with Donald Trump.

After pocketing half a billion dollars from South Korean President Kim Dae Jung in June 2000, the next month, Kim Jong Il received Russian President Vladimir Putin in Pyongyang. It was the first-ever visit to North Korea by the top Russian (or Soviet) leader, made possible by the dramatic mood swing in Northeast Asia that Kim had effected. Not even his own father, Kim Il Sung, the original Great Leader, had risen to such stature during his half-century rule. In September Kim received Chinese President Jiang Zemin in Pyongyang.

In 2019 Kim Jong Un will continue his outreach campaign, meeting with Vladimir Putin, Shinzo Abe, receiving Xi Jinping, and meeting once again with Donald Trump and Moon Jae-In, perhaps even speaking at the UN General Assembly Session in the fall. Ensnared into a protracted negotiation process, President Trump will find it politically difficult to walk away and revive his “maximum pressure” campaign. Meanwhile, Kim’s nuclear arsenal will become ever more lethal and his intentions ever more venturesome.

Sung-Yoon Lee is Kim Koo-Korea Foundation Professor of Korean Studies and Assistant Professor at The Fletcher School of Law and Diplomacy, Tufts University.