Symposium: The Korean War Began 70 Years Ago This Week. We Asked the World’s Top Experts Whether It’ll End Before Turning 75 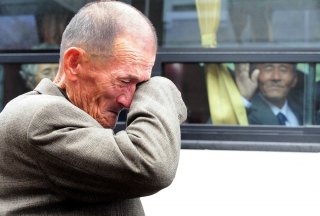 Editor's Note: Please also check out the Center for the National Interest's two-part profile Kim Jong-un's sister Kim Yo-jong as well as a recent report on how North Korea perceives U.S.-South Korea joint military exercises as well as analysis concerning the recent rise in tensions between Japan and South Korea.

Though the 1953 Armistice Agreement halted actual combat operations that claimed the lives of millions of people, the Korean Peninsula has nonetheless remained in a state of war since.

With that said, as the world commemorates the 70th anniversary of the start of the Korean War, the Center for the National Interest’s Korean Studies team decided to ask dozens of the world’s top experts a simple question: Do you believe that the Korean War will finally come to an end before its next major anniversary in 2025?

Below you will find links to each expert's analysis. Every day for the next several days, we will update this page with new perspectives. Please check back frequently!

Jihwan Hwang: Professor of International Relations at the University of Seoul and member of the Presidential Commission on Policy Planning.

Stephan Haggard: Lawrence and Sallye Krause Professor of Korea-Pacific Studies and Director of the Korea-Pacific Program at the University of California, San Diego’s School of Global Policy and Strategy.

Richard Javad Heydarian: Research Fellow at National Chengchi University and author of The Indo-Pacific: Trump, China, and the New Struggle for Global Mastery.

Grażyna Strnad: Associate Professor at Adam Mickiewicz University in Poznań.Jihwan Hwang: Professor of International Relations at the University of Seoul and Member of the Presidential Commission on Policy Planning.

Bridget L. Coggins: Visiting Scholar at The Fletcher School of Law and Diplomacy’s Center for Strategic Studies and Associate Professor of Political Science at the University of California, Santa Barbara.

Timo Kivimäki: Professor of International Relations at the University of Bath and author of both Can Peace Research Make Peace? and The Long Peace of East Asia.

Joshua Fitt: Researcher at the Center for a New American Security (CNAS).

Yu Bin Kim: PhD candidate in Political Science at the University of Missouri.

Darcie Draudt: Advisor for Public Policy at StratWays Group and PhD candidate in the Department of Political Science at Johns Hopkins University.

Scott A. Snyder: Senior Fellow for Korea Studies at the Council on Foreign Relations (CFR) and author of South Korea at the Crossroads: Autonomy and Alliance in an Era of Rival Powers.

Damin Jung: Politics and Defense Reporter with The Korea Times.

Jieun Baek: Founder and Director of Lumen, a non-profit working to provide North Koreans with access to uncensored information, and author of North Korea’s Hidden Revolution: How the Information Underground is Transforming a Closed Society.

Spencer D. Bakich: Associate Professor of International Studies and Director of the National Security Program at the Virginia Military Institute (VMI) and author of Success and Failure in Limited War: Information and Strategy in the Korean, Vietnam, Persian Gulf, and Iraq Wars.

Chris Steinitz: Director of the North Korea Program and Research Scientist at CNA.

Chung Min Lee: Senior Fellow in the Asia Program at the Carnegie Endowment for International Peace, Chairman of the Advisory Council of the International Institute for Strategic Studies (IISS), and former South Korean Ambassador for National Security Affairs.

Daniel F. Runde: Senior Vice President, Director of the Project on Prosperity and Development, and William A. Schreyer Chair in Global Analysis at the Center for Strategic and International Studies (CSIS).

Robert Gallucci: Professor at Georgetown University and former Dean of its Edmund A. Walsh School of Foreign Service, former Ambassador at Large leading the US negotiation efforts with North Korea which resulted in the 1994 Agreed Framework, and former US Assistant Secretary of State for Political-Military Affairs.

Ted Galen Carpenter: Senior Fellow in Security Studies at the Cato Institute and a Contributing Editor at The National Interest (TNI).

Andrew Yeo: Professor of Politics at The Catholic University of America, author of Asia's Regional Architecture: Alliances and Institutions in the Pacific Century, and co-editor of North Korean Human Rights: Activists and Networks.

Jonathan Corrado: Director of Policy at The Korea Society (TKS).

Michael D. Cohen: Senior Lecturer at the National Security College of the Australian National University’s Crawford School of Public Policy, author of When Proliferation Causes Peace: The Psychology of Nuclear Crises, and co-editor of North Korea and Nuclear Weapons: Entering the New Era of Deterrence.

Antonio Fiori: Associate Professor of History and Institutions of Asia at the Università di Bologna and Adjunct Professor at Korea University.

Haksoon Paik: President of the Sejong Institute, Member of the Board of Directors of the Kim Dae-jung Peace Center, and author of The History of Power in North Korea: Ideas, Identities, and Structures.

Stephen Noerper: Senior Director for Policy at The Korea Society (TKS), Adjunct Professor at Columbia University, Senior Advisor to the UN Department of Political and Peacebuilding Affairs’s Programme to Support Cooperation in Northeast Asia, and Member of the National Committee on North Korea.

Michael O’Hanlon: Senior Fellow and Director of Research in Foreign Policy at the Brookings Institution, author of A Skeptic’s Case for Nuclear Disarmament, and author of the upcoming book The Art of War in an Age of Peace: A U.S. Grand Strategy of Resolute Restraint.

Mitchell Lerner: Professor of History and Director of the Institute for Korean Studies at Ohio State University.

Miyeon Oh: Senior Fellow and Director of the Asia Security Initiative in the Atlantic Council’s Scowcroft Center for Strategy and Security.

Joseph S. Nye, Jr.: Professor at, and former Dean of, Harvard University’s Kennedy School of Government and author of Do Morals Matter? Presidents and Foreign Policy from FDR to Trump.