Talk to Russia About North Korea 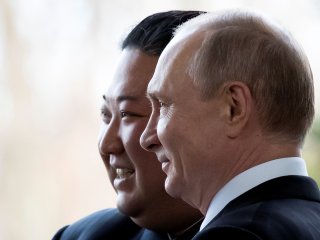 Moscow once was the first stop for North Korea’s leader. Joseph Stalin was the man whose approval Kim Il-sung, appointed by the Soviet occupation authorities, had to win for an attack on the South.

The USSR had plenty of military hardware with which to equip the North Korean army. However, Stalin sought to keep Moscow in the background. He wanted to avoid a confrontation with the United States and entangle the People’s Republic of China in the conflict. The latter increased the PRC’s reliance on Moscow and share of the war’s costs.

Kim Il-sung played his two large neighbors against each other. Observed Fyodor Tertitskiy of NKNews: “North Korea deftly exploited this diplomatic game. For the entire Cold War, Pyongyang successfully milked the Kremlin for resources, with offering nothing but smiles and talk of friendship in return. The fact that the same line was pursued towards Beijing was a small consolation.”

Later the DPRK reacted badly when after the Soviet Union’s collapse the newly constituted Russian government opened diplomatic relations with the Republic of Korea. Although China eventually followed suit, the North’s reaction then was more muted, presumably because it would not have been wise to offend both of its occasional patrons. China’s and Russia’s relative status in Pyongyang were highlighted in 2018 by the summit between Kim Jong-un and former president Donald Trump. The summit triggered five visits between Kim Jong-un and the PRC’s Xi Jinping but only one three-hour, mostly symbolic meet-and-greet with Russia’s Vladimir Putin.

Although Moscow’s relations with North Korea still matter less than those that North Korea maintains with China, the former retains veto power over United Nations sanctions and is the source of some hard currency for financially strapped Pyongyang. However, Russia appears to genuinely oppose a nuclear North, which is hardly surprising since North Korea’s growing arsenal makes that state more independent from all its neighbors, including its nominal friends. Recent estimates from the Rand Corporation and Asan Institute are particularly sobering for Moscow. Within a few years, Pyongyang could possess a couple of hundred nukes, making it a mid-level nuclear power. For Moscow, both shaping North Korea’s behavior and coping with its collapse would become much more challenging.

Indeed, the recent visit to Seoul of Russia’s top nuclear envoy, Vice Foreign Minister Igor Morgulov, ironically at the same time as U.S. Special Representative Sung Kim, was indicative of the Putin administration’s concern. Unfortunately, there was no three-way meeting. “While top nuclear envoys from the U.S. and Russia visited South Korea simultaneously, the three countries did not hold a trilateral meeting,” Sung Kim explained. “It reflects that the officials of the U.S. and Russia came to South Korea for different purposes. I guess the Moscow government needed to figure out what’s going on before North Korea-U.S. dialogue resumes. Along with China, Russia has recently stressed the need for six-party nuclear talks. It may have wanted to prepare for a multilateral dialogue frame in advance. It is known that the three-way talks among the United States, South Korea and Russia did not take place in Seoul because of Russia’s rejection. It appears that Russia didn’t want to pressure North Korea by acting as if it was supporting the South Korea-U.S. alliance.”

Given the state of U.S.-Russian relations, little more might be expected. Yet Washington’s and Moscow’s interests in the Korean Peninsula are similar. In contrast to China, both worry less about North Korean stability, since the North’s northern border area matters less to them. Moscow also has much less trade with the DPRK and would suffer less geopolitically than the PRC from a reunified Korea allied with America.

Which suggests the possibility of a discussion, and perhaps even a deal, between Moscow and Washington on the Koreas. In its own right, the U.S. should seek to defuse tensions with Russia and find a modus vivendi to move past Ukraine, Syria, and other seemingly intractable controversies. While Russia is unlikely to become an ally with the West against the PRC, those two nations have an uneasy relationship in which tensions might predominate if antagonism toward Washington no longer pushed them together.

Similarly, the United States should seek to win stronger support from the Putin government for North Korean denuclearization. Although historical loyalties going back to the Korean War will always affect Moscow’s perspective toward the North, the differences in viewpoint would narrow if Russia did not see itself in such an adversarial relationship with America. In that case, Moscow might be willing to coordinate more with the United States and use its influence in Beijing to press for a tougher position toward the North.

Although the PRC poses the most important foreign policy challenge to America, Pyongyang is the most intractable problem and it threatens to get far worse. The North continues to turn inward, rejecting an offer of coronavirus vaccines, reversing economic reforms, and seeking to limit access to South Korean culture. At the same time, North Korea continues to expand its nuclear arsenal.

Washington should continue to vigorously pursue diplomacy with North Korea. However, the United States also would benefit from the assistance of additional allies working to halt or simply slow the North Korean program. Russia would be a valuable addition to the denuclearization caucus. The Biden administration should seriously engage Moscow on the issue.

Doug Bandow is a Senior Fellow at the Cato Institute. A former special assistant to President Ronald Reagan, he is the author of several books, including Tripwire: Korea and U.S. Foreign Policy in a Changed World and co-author of The Korean Conundrum: America’s Troubled Relations with North and South Korea.