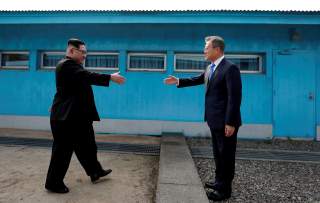 The real question for 2019 is not whether Kim Jong Un will soon give up his nuclear weapons but whether and how South and North Korea will continue to drive the peace process after a year which saw some of the most dramatic steps towards Korean reconciliation since the Korean War. And that question begins with the United States.

As any Korea watcher is aware, the denuclearization talks between the United States and the Democratic People’s Republic of Korea (DPRK) that looked so promising in June have stalled, precipitously. The breakdown began as it became clear to Kim and his advisory team of spies, generals and diplomats that President Trump’s equivalents (which include the military-industrial and arms control think tanks and a media that closely follows their directions) had no intention of relaxing his “maximum pressure” campaign of sanctions and military pressure before Kim dismantles his nuclear apparatus.

This tough approach, which was in place even as Trump was painting a glossy version of the talks, was buttressed by a withering campaign by certain U.S. media outlets (NBC, New York Times). They used carefully planted intelligence leaks and purposely distorted data from think tanks to convince the U.S. public that North Korea was “cheating” on an “agreement” that never existed in the first place—but could be completed with effective negotiations.

Moreover, the U.S. propaganda barrage obscured the fact that the U.S. administration has reneged on its own pledges in Singapore to “establish new US-DPRK relations” and help North and South “build a lasting and stable peace regime.” These necessary steps would help convince the DPRK that its nuclear disarmament could proceed safely while protecting its national integrity.

President Moon Jae-in and his team understand this dynamic only too well; in 2018 severe tensions between Seoul and Washington emerged over two issues. First was the issue of sanctions, especially as they pertained to North-South agreements to link their transport systems and establish a permanent liaison office north of the DMZ. Second was the pace of the inter-Korean peace process itself. America’s reluctance to embrace South Korea’s right to make the peace inside its own country and on its own terms brought the critical issue of South Korean sovereignty to the fore in a way that has not happened since South Korea’s democratic spring of 1960.

As I look at 2019, I think the two Koreas’ drive towards a permanent peace (including denuclearization) will continue, forcing the United States, with support from Moon, to adapt to South Korea’s more effective gradualist approach. Bottom line: Korea has spoken; war is no longer an option.

Tim Shorrock is a regular contributor to The National Interest and writes regularly on Korea, Japan, and U.S. intelligence for The Nation. Follow him on Twitter at @TimothyS.