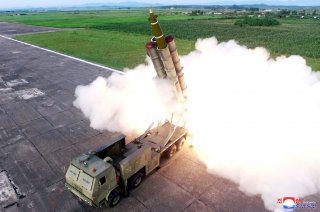 In one of the rarest cases in the history of warfare, the armistice agreement which produced a ceasefire in Korea in 1953 has survived for nearly seventy years without resulting in a peace treaty. The primary reasons for this anomaly lie in the Cold War system, the failure of the war to produce a surrender, and the fact that the parties to the conflict were not the same as the signatories to the Armistice. These factors combined to keep the armistice system alive, despite repeated provocations from the North which have included nuclear and missile tests as well as a host of lesser, but no less threatening, actions.

The end of the Cold War saw South Korea’s spectacular rise from abject poverty to its current status as a major global economy, while North Korea continues to struggle with an outmoded socialist economic system and the loss of support from allies in the Eastern Bloc. These two factors have created the conditions for change. North Korea believes its nuclear and missile programs will create a more favorable environment for it to pursue growth and prestige, but this is mistaken. For the United States and its allies, the possibility of peace and an end to the armistice is entirely dependent upon North Korea’s denuclearization.

Yet successive U.S. administrations beginning with George H.W. Bush have all failed to produce this result, despite various strategies employed to persuade North Korea to rid itself of its weapons. If anything, this failure has allowed North Korea to rapidly build up a nuclear arsenal that well exceeds anything it might need for simple deterrence and to take actions that might produce changes in its domestic economy and political system.

A successful conclusion to the three summit meetings between President Donald Trump and Chairman Kim Jong-un remains elusive despite America’s unprecedented offer, this time around, to revitalize the North Korea economy in exchange for denuclearization. The problem is the lack of mutual trust. Even the several attempts on the part of South Korea to mediate the conflict have failed.

Any hope of finally ending the Korean War depends heavily on whether another round of negotiations will occur. However, the signs do not augur well for this development. North Korea has raised new tensions on the peninsula by blowing up the inter-Korean liaison office in Kaesong on the North Korean side and threatening to reintroduce troops in the DMZ. The United States must understand that these provocations are an expression of frustration over the failed negotiations with Washington. Given their deteriorating economy and possible political unrest in North Korea, it can be expected that it will continue to build up its nuclear and ballistic missile programs.

At any rate, new negotiations can hardly be hoped for during a U.S. presidential election year. If and when they do occur, the parties must close the gap between America’s “all-at-once” strategy and North Korea’s insistence on a “step-by-step” one. To sweeten the pot, the United States can offer incentives while simultaneously calling upon U.S.-backed regional and multi-national institutions and mechanisms to guarantee security to the North. Any future discussion of an end to the Korean War and the signing of a peace treaty will succeed only as part of a new security regime in and around the Korean peninsula. North Korea for its part must of course persuade its adversaries that it is firmly committed to denuclearization.

Can this be accomplished in five years? Numerous obstacles remain and the prospects for success are not good, but the parties must try.

Yong-Chool Ha is the Korea Foundation Professor of Korean Social Science at the University of Washington’s Jackson School of International Studies and a Professor Emeritus of Seoul National University. He served as a member of the Presidential Commission on Policy Planning and on advisory committees to the Ministry of Foreign Affairs, Ministry of Unification, and the Ministry of National Defense.