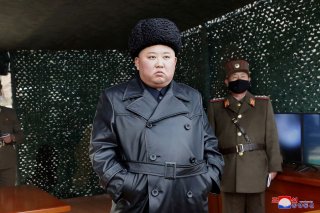 President Donald Trump has reportedly sent a letter to his good buddy, North Korean leader Kim Jong-Un, offering to help in his nation’s struggle against the COVID-19 pandemic. Fortunately for Trump, Pyongyang rejected his offer, with no less a luminary than Kim’s sister, Kim Yo Jong, essentially delivering the “thanks, but no thanks” response. Ms. Kim, who has steadily risen in prominence and profile since representing her brother at the 2018 Winter Olympics in Seoul, applauded the personal letter as “a good example showing [Trump’s] special and firm personal relations with Chairman Kim Jong Un” but further noted it was premature “to make a hasty conclusion or be optimistic,” implying that more than “merely” a personal letter was required to overcome the current “relations of confrontation.”

I say “fortunately for Trump” because it’s not clear his administration would have been prepared to take “yes” for an answer if Pyongyang had responded more positively. Ignoring the potential conundrum of the North asking for assistance while still claiming (to the belief of no one) that it is COVID-19-free, it’s pretty obvious that the first thing Pyongyang would have asked for is sanctions relief, which it has been demanding since well before the pandemic struck Asia. In addition to the political problem of appearing weak in the face of North Korean demands, wide-ranging sanctions relief would also undermine Trump’s “maximum pressure” campaign. While many have been calling for such a move anyway, including both the Chinese and Russians at the United Nations Security Council, the administration has steadfastly (and in my view rightly) refused demands for widespread relief beyond humanitarian assistance, which is already allowed under U.S. and UN Security Council sanctions.

There are some who have believed (and others who have feared) that President Trump, eager for a foreign policy “victory” in an election year, would cut a quid pro quo deal with Pyongyang, trading sanctions relief for an end to nuclear and missile testing. Pyongyang may still be hoping for this. Note it conducted new missile tests for the first time in months around the time the letter was delivered.

But such a deal, which would leave Pyongyang’s missile and nuclear inventory and production facilities and capabilities intact, would have drawn loud complaints, not just from the opposition, but from Trump’s hardcore “no deal is better than a bad deal” base, the same folks who breathed a huge sigh of relief when last year’s Hanoi Summit ended in “failure.” Politically speaking, Trump is better off with no deal than with almost any deal that the North Koreans would agree to sign.

Setting sanctions and broader policy toward North Korea aside, what if Kim had said “Great! Please send me a few million face masks and a thousand respirators (along with hand sanitizers and toilet paper, no doubt). Could you imagine the outcry in the United States, which is facing a critical shortage of these items, were some to be shipped abroad anywhere, much less to North Korea.

A case in point: In South Korea 1.4 million citizens have signed a demand that President Moon Jae-in—who has been praised internationally for his nation’s quick response to the pandemic—be impeached. His sin: sending five million dollars’ worth of medical equipment to Wuhan in the early days of the epidemic, including 2 million face masks and 1 million medical masks. As Americans are being told face masks are not essential—not because they are not helpful but because they are in such short supply even those legitimately ill or their care-givers cannot obtain them—imagine if the Trump administration started provided such supplies to North Korea of all places.

Of note, the world learned of President Trump’s overture not from the White House but from Chairman Kim’s sister. The Trump administration has been pretty vague and non-committal regarding the correspondence, with a senior White House official reportedly noting that Trump’s letter was “consistent with his efforts to engage global leaders during the ongoing pandemic,” and that “the President looks forward to continued communications with Chairman Kim.” While, as Churchill reminded us, “jaw-jaw is better than war-war,” the prospects of this sort of pen-pal diplomacy resulting in progress toward Washington’s ultimate goal of Korean Peninsula denuclearization remains slim.

As an interesting aside, Moon has also been severely condemned for yielding to Chinese pressure not to ban travel to and from China once the Wuhan outbreak occurred, something that North Korea (and the Trump administration) did not hesitate to do. Rubbing salt in the wound, several Chinese regions are now banning travel to and from Korea as China’s outbreak is seemingly coming under control and South Korea remains Asia’s coronavirus hotspot. But that’s a story for another time.

Ralph Cossa is President Emeritus and WSD-Handa Chair in Peace Studies at the Pacific Forum in Honolulu.