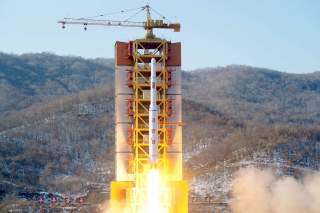 In listening to Special Representative Steve Biegun’s remarks today at the Carnegie International Nuclear Policy Conference, which is affectionately known as #Nukefest on Twitter, I couldn't help but wonder what happened to the Biegun who dazzled so many of us Korea watchers just a few weeks ago. For those of us who support diplomacy with North Korea as well as an action-for-action approach in resolving not only the nuclear issue but forging a new relationship with Pyongyang, Biegun’s comments at Stanford University seemed almost heaven sent.

Specifically, this was the line from Biegun’s speech at Stanford that was praised by many pro-engagement Korea hands:

“For our part, we have communicated to our North Korean counterparts that we are prepared to pursue—simultaneously and in parallel—all of the commitments our two leaders made in their joint statement at Singapore last summer, along with planning for a bright future for the Korean people and the new opportunities that will open when sanctions are lifted and the Korean Peninsula is at peace, provided that North Korea likewise fulfills its commitment to final, fully verified denuclearization.”

What many of us assumed is that the Trump Administration was softening its approach—opting to work on all four of the pillars of the Singapore Declaration “simultaneously and in parallel”. The hope was that such a statement meant an action-for-action approach. It also seemed that would mean there would be items that could be agreed to much sooner than others—such as an end to the Korean War through a political statement as well as the establishment of liaison offices.

Unfortunately, it seems the administration has changed its tune, despite Biegun’s clever attempt today at spinning the obvious. While we may never know exactly what happened since the Hanoi Summit, the goal posts have clearly been moved on the U.S. side. Specifically, three things have changed that could very well end the current detente on the Korean Peninsula and spawn the resumption of tensions:

Action for Action is dead: America and North Korea would follow a phased plan of denuclearization, where both sides would make matching concessions until all sanctions were removed in exchanged for full denuclearization. Sometimes also referred to as a step-by-step- approach, each side would give up something to get something, until such time both sides get to the desired end state. If there is any logical path to convince North Korea to give up its nuclear weapons, this is it.

Today Biegun confirmed that won’t happen. “We are not going to do denuclearization incrementally,” explained Biegun. “The president has been clear on that and that is a position around which the U.S. government has complete unity.” This news alone could spell the end of negotiations, but from here it gets far worse.

Team Trump demanded at Hanoi an approach that has been described as “go big”, or Chairman Kim Jung Un’s agreement to full denuclearize in exchange for full sanctions relief—and no other option: Why anyone in the administration thought Kim would go for this is baffling. Considering the fact that Washington knew Pyongyang’s was only willing to give up parts of the Yongbyon nuclear facility in exchange—then offering all of Yongbyon as the summit was falling apart—for the most damaging UN Security Council Resolutions put in place from 2016-2017, it boggles my mind why Trump even went to Singapore--unless he had other motivations.

Denuclearization now includes the ending of all of Kim’s Weapons of Mass Destruction (WMD) programs: While this has been touched on in the past, it now seems the administration will not accept just the ending of North Korea’s nuclear program, removal of all fissile material and warhead destruction. Now, Team Trump is demanding all chemical and biological weapons stockpiles and material be destroyed as well.

What to make of all this? Put yourself in Chairman Kim’s not insubstantial shoes. If Washington is demanding what looks like a surrender, which is how it may well look in Pyongyang among members of the military and the party cadre around Kim, abjuring what amounts to all of the WMD that would deter America from ever considering any sort of regime change is a non-starter. Diplomacy is the fine art of give and take on the biggest stage imaginable, and diplomacy can’t be conducted if one side simply issues diktats.

What’s more, North Korea has weathered the so-called “maximum pressure” campaign comparatively unscathed. Sure, economic growth has ground to a halt and turned negative, but there are signs that the sanctions regime does have some big holes, and Pyongyang has evidently mastered the ability to survive under far more taxing conditions.

The real question now is this: will Kim, feeling pressured, decide to launch a satellite into orbit? Or even fire off a long-range missile to demonstrate his resolve? Trump may not like the answer.

Harry J. Kazianis is director of Korean Studies at the Center for the National Interest. Follow him on Twitter @Grecianformula.