Trump Has Damaged the U.S.-Japan-South Korea Alliance—And China Loves It 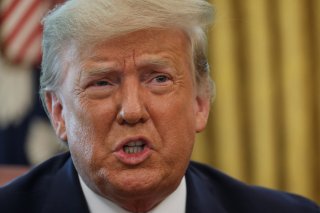 Earlier this week, President Donald Trump suggested that his competitor for the presidency, former Vice President Joe Biden, is a "gift to communist China," implying that Beijing will work to sabotage the election in Biden’s favor. In fact, quite the opposite is true. Chinese leaders must be giddily toasting Trump on a nightly basis. Trump has accomplished in just three years an objective that China has long pursued: reducing U.S. influence in the region by weakening the U.S.-Japan-South Korea partnership.

Japan and the Republic of Korea (ROK), steadfast American allies in Asia for nearly seventy years, provide the basis for American power in the Pacific.  These alliances are the core of the security architecture in the region that deters a nuclear-armed North Korea, prevents China from using force against Taiwan, and allows the United States to maintain a robust naval presence in the seas. Both countries are important economic actors and influential middle powers on the global stage. The value of these relationships hasn’t been lost on the Pentagon, which has labeled the U.S.-ROK alliance the “linchpin of peace and prosperity” and the U.S.-Japan alliance the “cornerstone of peace and security.”

But the American-led alliance system in Asia is not only about military power. Like NATO, it is also an alliance of values. Japan and the ROK are robust democracies with vibrant civil societies. The strength of the alliance lies not only in its ability to project military might but in its capacity to help advance a wide range of what should be shared objectives: supporting international rules to level the economic playing field, ensuring the free flow of information, fighting climate change, and safeguarding democracy at a time when illiberal ideologies and authoritarianism are ascendant.

Rather than bolstering these vital alliances, Trump has repeatedly worked to undermine them. In an approach that smacks of extortion, he has demanded exorbitant amounts for the U.S. base presence in the ROK and looks poised to continue a similar approach with Japan. He has ignored the fact that Japan and the ROK are net security exporters, contributing large sums of money to maintain U.S. forces on their territory and dispatching troops to U.S.-led and multilateral overseas operations. All the while, he has sought to cut a deal with North Korea dictator, Kim Jong-un, with little regard for Japan’s and the ROK’s interests, stoking fears that a possible deal might only cover U.S. concerns, such as limiting just missiles that could reach the United States. To top it off, Trump achieved a new diplomatic low with America’s treaty allies: insulting ROK president Moon Jae-in and Japanese prime minister Shinzo Abe by mocking their accents at a fundraiser.

In the economic sphere, Trump has pushed protectionist policies that target exports from both Japan and the ROK, just as both countries seek to diversify their export markets and investments away from China. Even after negotiating new trade deals with both countries, he has left in place some of the unilaterally imposed tariffs and kept the threat of others on the table.

Trump has damaged the alliance system in Asia by undermining its foundation: trust. However dedicated both countries have been to the alliance, the president’s words and actions can’t help but cause them to wonder how much they can rely on Washington. The exorbitant demands on the ROK to cover hosting U.S. troops have triggered a popular backlash there. One former ROK foreign minister, who once led the ROK’s efforts to denuclearize North Korea, suggested U.S. demands have made it time for the ROK to consider the development of a nuclear arsenal, a measure that could trigger proliferation in a region with other nuclear-aspirant states. In Japan, a country with a long history of favorable views of the United States, only 36 percent of Japanese citizens trust Trump. With the fear of U.S. abandonment high, the current Abe administration—at least publicly—has doubled down on the alliance. But look beneath the public posturing, and many officials and commentators are discussing the need for an “insurance policy.”

There is another crucial piece to this alliance system, however: the vital Japan-ROK relationship, which has been bedeviled by lingering historical issues. A strong and committed U.S. presence is the glue that can keep Japan and the ROK aligned and the security architecture intact. With U.S. leadership, the alliance system creates military interdependence between the United States, ROK and Japan that binds their interests together.

However, perceptions of a wavering U.S. commitment make both countries more susceptible to Chinese pressure tactics and endanger the entire edifice of the security architecture. The ROK comes under the greatest pressure owing to China’s proximity, power, and influence over North Korea. Japan, in turn, understands that greater Chinese sway over the ROK affects its own security; in fact, for more than a century, Japan has fixated on foreign influence on the Korean Peninsula as a critical strategic concern, propelling Japan into two wars and a harsh colonization of the Korean Peninsula. However debatable the claim, Tokyo recently voiced concern that the ROK has tilted too far toward China, citing that as grounds to oppose Seoul’s possible inclusion in the G7 Summit.

This isn’t an outcome favorable to the United States, ROK or Japanese interests. Instead, Trump’s policies have played directly into the hands of Beijing, which would prefer to see Washington divided from its Asian allies and Washington’s Asian allies divided from each other. No wonder Chinese leaders would like to see Trump reelected this November. As one former Chinese diplomat remarked in a moment of candor, “If Biden is elected, I think this could be more dangerous for China because he will work with allies to target China, whereas Trump is destroying U.S. alliances.”

Gene Park (@idenshikoen) is director of the Global Policy Institute and Chair of the Political Science and International Relations Department at Loyola Marymount University.

Mieczysław P. Boduszyński (@MietekB) is an associate professor of Politics and International Relations at Pomona College and a former U.S. diplomat.