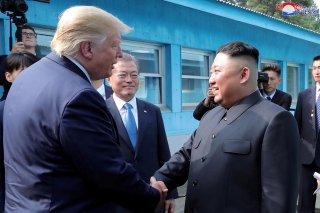 One of the most surprising moments of Donald Trump’s presidency was the diplomatic opening he made to North Korean leader Kim Jong-un. The opening resulted in a pair of summits in 2018 and 2019, although it did not result in any type of diplomatic agreement.

Even years later, we’re still learning surprising things about the meetings between Trump and Kim.

The BBC reported over the weekend, in a documentary about the Trump presidency called  Trump Takes On the World, that Trump once offered Kim a ride on Air Force One.

The offer, per the report, came during the second summit between the two leaders, which took place in Hanoi in February of 2019. And although the summit collapsed, Trump had made the suggestion before it did.

“President Trump offered Kim a lift home on Air Force One.” Matthew Pottinger, an Asia expert who served on the National Security Council at the time, told the BBC. “The president knew that Kim had arrived on a multiday train ride through China into Hanoi and the president said: ‘I can get you home in two hours if you want.’”

It’s been known for a while that Trump agreed in that same summit to a request that the United States cancel going military exercises with South Korea, to the astonishment of then-national security advisor John Bolton and other aides.

“Kim Jong-un, as he had many times in the past, complained about the big joint exercises between South Korea and American forces, which had been going on on the Korean peninsula for about sixty years plus,” Bolton said in the BBC documentary. “Trump, out of nowhere, said, ‘I’m going to cancel the war games [as he called them]. There’s no need for them, they’re expensive and it will make you happy.’ I couldn't believe it.” Bolton had addressed that moment in other interviews, including the recent North Korea: Inside the Mind of a Dictator, as well as his memoir.

The Air Force offer, however, remained out of the news until this week.

“It may very well have been the case that Trump offered Kim Jong-un a ride on Air Force One. I wouldn’t an offer like this past the former president, who appeared to believe he could use his personal relationship with Kim to charm him into major concessions,” Dan DePetris, a fellow at Defense Priorities, told the National Interest.

“But whether he did or didn’t wouldn’t have made any material difference on the big question: is North Korea open to denuclearization? Given the tough geopolitical environment North Korea finds itself in and Kim’s own obsession with self-preservation, the answer is almost certainly no,” DePetris added.