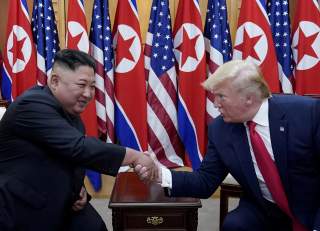 The Democratic People’s Republic of Korea has grown quite sensitive about the issue of human rights. Before Christmas, the North’s UN ambassador denounced a critical resolution as the product of “hostile forces that obsess with inveterate hatred against us.”

The U.S. also came under fire. A foreign ministry spokesman criticized Washington’s “malicious words” and “grave political provocation.” Pyongyang warned that the U.S. would “pay dearly” for its statements, which “will only produce a result of further aggravating the already tense situation on the Korean peninsula.”

Despite the DPRK’s fulminations, the Trump administration has not pressed the issue. In December Washington declined to back a UN Security Council discussion of North Korea’s human rights record. In fact, the president stopped talking about the North’s record when he sought to make a deal with Pyongyang.

Kim Jong-un poses a serious challenge to U.S. policy, mixing security and humanitarian concerns. To focus on the first seems callous. To emphasize the second is unrealistic. Mixing the two issues risks overloading a relationship that remains limited at best. Indeed, the president apparently assumes that addressing human rights would sink the already troubled nuclear talks. (Seoul has been equally hesitant to raise the issue, even when the victims are South Koreans—for instance, kidnapped by the North.)

Pyongyang is isolated and vulnerable; suffocating repression is a means of regime preservation. The less certain and more dangerous the security environment, the less likely Kim is to relax internal controls. To demand liberalization before offering security almost certainly is a dead end.

However, some analysts see today’s nuclear deadlock as reason to target human rights. For instance, Robert McCoy, a former Korea specialist for the Air Force, recently argued: “Since there is virtually no chance of nuclear disarmament, as finally admitted by the North, there is nothing to lose by bringing pressure on human rights to bear.”

The topic will never be easy to address: The North’s record is abysmal, turning it into a perverse standard of global governance. It has been oft said that Eritrea is the North Korea of Africa, which is not a compliment.

Freedom House rates North Korea at the bottom, as not free. Recent reports from the Committee for Human Rights in North Korea detailed Pyongyang’s information controls, prison camps, and other tools of repression. Human Rights Watch called the DPRK “one of the world’s most repressive states.” The Kim dynasty “restricts all civil and political liberties, including freedom of expression, assembly, association, and religion. It also prohibits all organized political opposition, independent media, civil society, and trade unions.”

The State Department’s latest human rights report includes everything but the kitchen sink, which is implied: “unlawful or arbitrary killings by the government; forced disappearances by the government; torture by authorities; arbitrary detentions by security forces; detention centers, including political prison camps in which conditions were often harsh and life-threatening; political prisoners; rigid controls over many aspects of citizen’s lives, including arbitrary interference with privacy; censorship, and site blocking; substantial interference with the rights of peaceful assembly and freedom of association.”

Religious liberty also is largely nonexistent. The United States Commission on International Religious Freedom reported that North Korea “places unjust restrictions on its people’s inherent right to freedom of religion or belief” and “treats any expression of independent assembly or thought, including religious practice, as a threat to its very existence.” Only a few tightly controlled churches are allowed to operate.

Obviously, there is much on human rights that the two governments could discuss. Even small improvements in Pyongyang’s practices would offer significant benefits to the North Korean people.

However, despite the DPRK’s angry complaints about human rights talk, the U.S. has little leverage to force change. Having already gone all-in on sanctions to pressure the North over its nuclear program, Washington has few options left for other issues, such as human rights.

Moreover, denuclearization is not the only issue. In fact, an arms control regime, which accepts but limits the Kim regime’s nuclear ambitions—a second-best, perhaps, but likely the most realistic option—remains a worthwhile objective. Thus, there are prudential reasons for human rights to remain a secondary, though still important, objective, even if the Kim-Trump bromance ends.

The security challenge posed by North Korea is obvious. With the breakdown of talks between Kim and the Trump administration, the DPRK is expected to move forward to perfect its long-range missiles, which would allow it to target the American homeland with nuclear weapons. Pyongyang already presents a significant conventional threat to the South’s capital of Seoul, which sits uncomfortably close to the inter-Korean border. Worse, the North is presumed to have the potential capability to hit Seoul, Tokyo, and Guam with nuclear weapons. The consequences of doing so obviously would be catastrophic.

Unfortunately, Washington’s hopes for denuclearization almost certainly will come to naught. Nukes provide North Korea with obvious security and political benefits, and Kim has no reason to trust the U.S., which too often has resorted to regime change. A policy of arms control is the logical replacement but has yet to be accepted by a policy community which only slowly accepts international realities stemming from limits on Washington’s power and abilities.

In the meantime, the bilateral relationship could grow dangerously unstable. Just as President Donald Trump personalized apparent success after first meeting Kim, the American leader is likely to personalize failure. If he feels betrayed, he might return to the rhetoric and threats of “fire and fury.” With the North’s military essentially on a “use it or lose it” status, the risk of accidental/inadvertent/mistaken conflict would be high.

The lack of a quick and certain communication means exacerbates the risks. The situation certainly is better than it was before Trump and Kim met in 2018. Nevertheless, resulting conversations and visits have been limited both in timing and substance. This becomes a bigger problem if the relationship tanks.

Imagine the Cold War without diplomatic relations with the Soviet Union. Imagine attempting to navigate the Cuban Missile Crisis without formal or informal portals into each other’s thinking, embassies nearby and possessing analysts with experience in each other’s countries. The two nuclear powers might have gone over the brink.

In fact, the price of failing to talk with the PRC for the first quarter of its existence was high. In late September 1950, allied forces had liberated Seoul and began pushing aside broken North Korean forces while advancing toward the Yalu River border with China. Beijing decided that it could not tolerate a U.S. presence on its border and, lacking any formal communication links to Washington, attempted to send warnings indirectly—through India, for instance. The Truman administration paid no attention and the PRC intervened militarily, leading Gen. Douglas MacArthur to declare that “We face an entirely new war,” which dragged on for another two and a half years.

Diplomatic relations might have yielded direct talks and prevented conflict. Imagine Washington and Beijing reaching a modus vivendi, such as allied forces halting along a line between Pyongyang and Wonsan, which might have offered the PRC a buffer zone sufficient to foreclose a military clash. Then hundreds of thousands of lives would have been saved and much destruction would have been avoided. The Cold War might have moderated.

So the administration should revive proposals to open reciprocal liaison offices, with the commitment that diplomatic relations will follow if fruitful bilateral discussions develop. Although initiating diplomatic ties would be good policy, doing so would be attacked as a concession to the North. That is a terribly myopic perspective, since the benefits would run both ways. Nevertheless, it would be a particularly difficult step to take in the aftermath of a breakdown in nuclear negotiations. The president would be accused of rewarding threatening behavior.

To warrant such a step, the U.S. should insist that the resulting dialog be serious and far-reaching. Security would be one subject, obviously, since those conversations have proceeded the furthest so far. Finding small deals to move the process forward should be a priority. For instance, forging an agreement by the North to end missile and nuclear tests and the U.S. and South Korea to halt military exercises. Another would be for a peace declaration. All parties could affirm that the fighting is over and a formal peace treaty should be ratified.

The governments also should develop a series of arms control-like steps, providing corresponding benefits for the North, which would be valuable in their own right and in toto would move down the path toward denuclearization. The Hanoi summit originally appeared to point in this direction. If successful, the result would be steadily greater security and stability even if the ultimate objective was not reached.

Also subject to negotiation would be future cooperation to achieve shared ends. American recovery of war remains would be one. Another would be to facilitate humanitarian assistance. As sanctions were lifted, assuming progress was made on security, opportunities for economic cooperation between the DPRK and both South Korea and America would also warrant conversation.

Finally, human rights should be an important part of the dialog resulting from establishment of relations. Pyongyang’s willingness to pursue truly broad engagement on issues that made it uncomfortable would determine whether bilateral relations deepened and expanded. Establishing a firmer diplomatic foundation also would help ease the North’s security concerns, reducing its excuses for intransigence.