Is the Trump-South Korea Cost Sharing Spat Over? 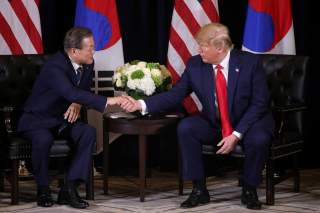 Washington and Seoul have a deal. Or more to the point, whatever deal that is signed won't include the spending windfall the Trump administration was hoping for.

The cost-sharing negotiations between the United States and South Korea have been filled to the brim with tension and brinkmanship. President Donald Trump has made no bones out of the fact that he thinks the South Koreans are penny-pinching in order to take advantage of the United States and spend as little as possible on their own defense. In Trump’s mind, South Korea is one of the wealthiest countries on the planet with a $1.6 trillion GDP, a booming manufacturing sector, and a proficient military that needs to pony up more money if it wants U.S. troops to remain stationed on the peninsula. It’s an irritant Trump has harbored since his days as a real-estate tycoon in Manhattan; during an interview with Playbook in 1990, Trump ravaged Japan, Europe, Saudi Arabia, and Kuwait for “walking all over us.”  Trump’s view of the matter is straightforward: if you have the ability to pay, you ought to pay.  No if’s, and’s, or but’s.

For the South Koreans, the matter isn’t so straightforward. The logic underlying these talks isn’t based on a balance sheet, but on pride, national sovereignty, and fairness. There is a reason why 68% of South Koreans polled by the Chicago Council on Global Affairs want President Moon Jae-in’s administration to stand fast and negotiate a lower increase than what Trump is demanding. One-quarter recommend the South walk away from the table entirely, a move that may play well with Moon’s progressive bass but would be guaranteed to solicit howls of protest from conservative lawmakers. Antagonizing South Korea’s principal security ally on the eve of legislative elections is not a route Moon is willing to go, even if he thinks Trump’s position is absurd. And yet Moon also can’t afford to swallow his grievances and capitulate to Trump, knowing that even coming close to Washington’s top-line number would spawn editorials lambasting him for spinelessness.

Fortunately, Washington seems to be taking a step back and reassessing what is actually possible in these talks. Nobody in their right mind believed that Trump’s demand for a 400% increase in Seoul’s contribution to the cost of the U.S. troop presence was reasonable. Indeed, for as sure of himself as Trump likes to project for the masses, the president likely didn’t think his request was going to be met either. This isn’t Trump’s first rodeo; negotiations involve give-and-take, and merely slamming your fist on the table and screaming that the other side fork over $4.7 billion can hardly be regarded as a negotiation. Trump, it should be noted, also has a big election coming up, and dragging a long-time Asian ally through the mud for a few more billion dollars would be a gift to whichever Democrat he ends up facing in the general election.

According to Chosun Ilbo, Washington has dropped its excessive $4.7 billion figure and is meeting in the middle. Seoul will reportedly pay 10-20% more than last year’s tab, with a commitment to purchase more U.S.-made weapons—something the South is already doing (Seoul is projected to allocate an additional $239 billion on defense over the next five years, much of which will be spent on U.S. military equipment). While the details have yet to be agreed on, a deal appears to be far closer than it was weeks ago when the chief U.S. negotiator walked away in a huff.

Ultimately, the strength of any alliance isn’t about how much the junior partner pays, but how capable both partners are. In the future, the Trump administration would be wise to devote more time encouraging South Korea to boost its capability and take an ever-larger share of responsibility for its own defense and less time milking Seoul for cash.