Trump's Iran Envoy: North Korea Is “How The Movie Ends” With Iran 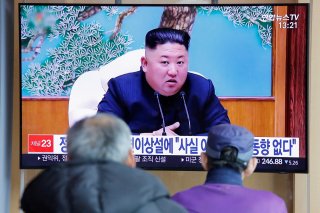 State Department official Brian Hook probably did not mean to say that the Trump administration was pushing Iran down the same path as North Korea, but some experts say that a recent speech by the special envoy implied just that.

North Korea shocked the world by testing its first nuclear weapon since 2006, after more than a decade of nuclear diplomacy with the rogue state failed. The Obama administration sought to avoid the same outcome in Iran by signing a deal to regulate the Iranian nuclear program in 2015.

The Trump administration left the deal in 2018, arguing that it would give Tehran a pathway to the bomb. Hook accused the Obama administration of setting up a repeat of the North Korean situation during a Tuesday video conference hosted by United Against Nuclear Iran.

Some experts, however, believe the Trump administration’s approach is closer to the mistakes that allowed North Korea to gain nuclear weapons.

The story of the Agreed Framework begins at the end of the Cold War, when the North Korean government signed the nuclear Non-Proliferation Treaty and opened the country up to International Atomic Energy Agency inspectors.

The IAEA began to raise questions about North Korea’s plutonium stockpiles, and the North Korean government “clammed up,” as Johnson put it.

Then the country threatened something that had never been done before in 1993: it would withdraw from the Non-Proliferation Treaty and reclaim its right to build nuclear weapons.

This kicked off a crisis for the Clinton administration, which considered using military force to stop the North Korean nuclear program. Former U.S. President Jimmy Carter broke the stalemate with a surprise trip to Pyongyang.

North Korea eventually signed a deal known as the Agreed Framework. The United States and its allies would help maintain electrical power plants in North Korea, including a civilian nuclear reactor, and the North Korean government would agree to IAEA inspections once again.

Both sides were also supposed to take steps to end the Korean War, eliminating the need for a nuclear buildup.

Clinton administration officials reportedly believed that the North Korean government would collapse soon, so the deal allowed the United States to stall for time until then.

But the regime in Pyongyang stayed in place, and the deal began to fray.

“Washington and Pyongyang each committed to take stepwise actions that would trigger fulfillment of the next obligation,” explained Andrea Stricker, a research fellow at the Foundation for Defense of Democracies, but led to “both parties accusing one another of failure to meet their obligations.”

The international community did not build its promised nuclear reactor in North Korea, while U.S. officials began to suspect the North Koreans of beginning a secret new nuclear program using highly-enriched uranium rather than plutonium.

The death knell for the Agreed Protocol came in late 2002, when the newly-elected Bush administration went public with accusations that North Korea was cheating and stopped U.S. fuel shipments to North Korean power plants.

North Korea pulled out of the Non-Proliferation Treaty in response, and tested its first nuclear weapon in 2006.

John Bolton, then Under Secretary of State for Arms Control and International Security, later bragged that he had gone “straight for the Agreed Framework’s jugular.”

Experts disagree on whether the Agreed Protocol could have been saved.

“Many experts now feel that a more swiftly implemented deal with North Korea would be ideal, with relatively quick disablement, dismantlement, and verification efforts in return for lifting of sanctions,” Stricker said.

Others say that it was a lack of political will that doomed the Agreed Protocol—and led to North Korea building the bomb.

“[H]ad the United States tried to engage with Pyongyang to address the country's illicit uranium enrichment program and actually delivered on U.S. obligations under the Agreed Framework, the North Korean nuclear crisis may have been averted,” wrote Kelsey Davenport, director of nonproliferation at the Arms Control Association, in an email to the National Interest.

“The North Koreans cheated, and went on to build nuclear weapons, but the Agreed Framework stopped them for a significant period of time, and when they resumed, this time with [highly enriched uranium], it was from a significantly lower position,” said Fitzpatrick, now an associate fellow at the International Institute for Strategic Studies.

He claimed that North Korea could have otherwise been able to produce “a couple dozen bombs worth of plutonium a year.”

Just as North Korea was becoming a nuclear-armed state, a new nuclear crisis was emerging on the opposite side of Asia. Iranian exiles revealed in 2002 that Iran had been working on a secret uranium enrichment program.

The revelations embarrassed Iran, which entered into international negotiations over its nuclear program. U.S. intelligence agencies wrote in a later assessment that the country had ended its nuclear weapons program by 2003.

But in 2005, the Conservatives took power in Iran, and President Mahmoud Ahmadinejad ramped up the country’s nuclear research program. The United States and its allies responded by imposing harsh economic sanctions on Iran over the next decade.

The negotiations resulted in the Joint Comprehensive Plan of Action, a 2015 deal involving Iran and six other countries. The international community agreed to lift economic sanctions on Iran in exchange for restrictions on Iran’s nuclear research and a strict IAEA monitoring program.

But some Democrats and many Republicans believed that the nuclear deal with Iran was flawed. President Donald Trump came out in full-throated opposition to the deal, beginning a campaign of “super maximum economic pressure” against Iran instead.

“This is a temporary and modest nonproliferation agreement that gave Iran a pathway to a nuclear weapon,” Hook explained in his Tuesday speech. “We pulled forward the expiration date because if we had waited, Iran would be richer, its proxies would have been richer, they would have retained their nuclear infrastructure.”

Iran continues to allow international inspectors to monitor its nuclear activities, but has removed all “operational limits” on those activities.

Johnson, who oversaw implementation of the nuclear deal at the State Department, believes that this has given Iran a “jumpstart” on its research and development.

He emphasized that some restrictions on Iran’s nuclear program would have been ten years away from expiring under the 2015 deal, while the international inspection program is permanent.

Fitzpatrick puts it more bluntly: that the Trump administration “has now decided to throw away” any time that the deal had “bought” from Iran.

The administration’s calculation may have been that the Iranian government would fall before it could build a nuclear weapon.

Bolton, who served as Trump’s national security advisor in 2018 and 2019, wrote in his book The Room Where It Happened that “only regime change would ultimately prevent Iran from possessing nuclear weapons.”

Trump administration officials deny that their current goal is regime change, and Bolton’s former underling Richard Goldberg later told the National Interest that he is “confident” that Trump is “sincere in his stated willingness to negotiate an agreement.”

Regardless of Trump's ultimate goals with Iran, the administration is now trying to kill off the remaining provisions of the nuclear deal.

Secretary of State Mike Pompeo has announced his intention to activate “snapback,” a legal mechanism at the United Nations that would restore international sanctions on Iran, and he may do so as early as Thursday.

Iranian officials have hinted that they could leave the nuclear Non-Proliferation Treaty and assert their right to a nuclear weapon if international sanctions are restored.

The movie could end in the same way as its North Korean prequel.

“If anything, the North Korea experience demonstrates the folly of exiting a functioning agreement without a viable strategy to address the fallout,” Davenport said. “The aftermath of the Agreed Framework underscores the importance of rejoining the nuclear deal with Iran, ensuring its full implementation, and using it as a floor for future negotiations.”

“Now the Trump administration is not in a good place to negotiate anything with Tehran, let alone the unrealistic agreement that Pompeo seeks,” she concluded.