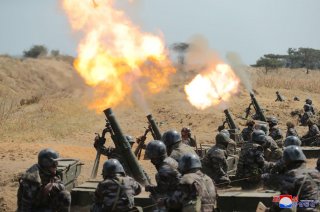 A pair of North Korean guards who work on the border with China fled to that country but were later caught, according to a report this week.

The Daily NK reported that the two guards left their post in January and went to China due to hunger, part of a recent trend of North Korean border guards abandoning their posts during the pandemic. The two guards were eighteen and nineteen years old, the report said.

The website’s source said that the Yalu River, on the border between the countries, was frozen solid in January, and the two guards walked across it. The guards, who brought their guns with them, attempted to loot abandoned houses in the Chinese village across the border.

Traditionally, North Korean border guards have made a practice of accepting bribes in exchange for allowing smuggling or safe passage, which makes the border more of a desirable assignment than most military postings in the country. But border restrictions due to the pandemic have severely curtailed the smuggling trade.

North Korea locked down its border with China even further earlier this month while placing a greater number of Ministry of State Security (MSS) officials in the Yanggang Province. This followed the closing of bridges between that province and China back in February.

“Locals who spotted the North Korean soldiers carrying their weapons initially thought that they were Chinese soldiers but reported the men when they noticed their suspicious behavior,” the Daily NK’s source said. “They were caught two days after they arrived in China.”

The source said that once the two soldiers were caught, they pleaded with Chinese police to not be sent back to North Korea, out of fear they would “starve to death.”

“Given their extreme fear of starvation, the food situation within the North Korean military seems to be at its worst in years,” the Daily NK source speculated.

The story also said that North Korea did not accept the return of the two soldiers, out of fear that they would bring the coronavirus back into the country. This is in keeping with what appears to be a North Korean policy of taking back deserters, defectors, and those who left the country for work reasons.

Another source told Daily NK that the two guards are currently being held at a prison in Dandong, which is located in that same area of China.

The North Korean regime has claimed for more than a year that there are no coronavirus cases in North Korea, a claim that’s been doubted by health agencies around the world.  The country has put in place severe restrictions, and also accepted vaccines from international organizations.