Typhoon Lingling Is Coming: Remember the 5 Deadliest Typhoons of All Time 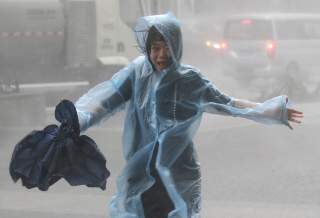 The Korean Peninsula is bracing for Typhoon Lingling, which is expected to pass off the west coast of South Korea on Saturday afternoon and eventually making landfall in North Korea on sometime on Saturday evening.

The typhoon has intensified on its northward trajectory, amassing the approximate strength of a category 3 hurricane since its inception off Taiwan’s east coast.

Lingling will be South Korea’s thirteenth tropical cyclone this year, not an uncommon number for a region frequently beset by tropical cyclones. The vast majority of these are either too weak to cause significant structural damage and loss of life, or successfully counteracted by flood and wind mitigation techniques.

There have, however, been a handful of especially powerful typhoons that penetrated existing preparedness systems to cause some of the worst disasters in human history.

Here are five of the most destructive.

Not only the deadliest typhoon but one of the worst natural disasters in human history, Typhoon Haiphong devastated the Vietnamese port city of Haiphong in 1881. As with many natural disasters prior to the advent of modern meteorology, Haiphong’s precise origins remain shrouded in mystery. The typhoon, which is believed to have originated near the Philippines, multiplied in strength by the time it reached the Gulf of Tonkin. The city of Haiphong was utterly destroyed and contiguous regions were heavily flooded, leading to a staggering death toll of around 300,000. And these are only the direct fatalities; countless more survivors are estimated to have died from the disease, starvation, and chaos left in the Typhoon’s wake.

Experiencing a period of explosive growth shortly after its formation in July 29, 1975, Typhoon Nina weakened to a tropical storm as it approached China’s east coast through Taiwan’s mountains. Chinese authorities had reason to believe that the worst of Nina had passed--but then, the Banqiao Dam collapsed. Seven counties and a large portion of the countryside were inundated; less than 20,000 drowned over the next several hours, but 230,000 died from disease and a region-wide famine over the next month.

The most recent typhoon on this list, Haiyan was a 2013, category five tropical cyclone and on record as one of the strongest of its kind to ever make landfall. Haiyan made no less than six landfalls over the Philippines, reaching a peak wind speed of 195 miles and causing the lion’s share of its destruction in the Visayas islands of the Central Philippines. 6,352 were confirmed dead in the typhoon’s wake, but this number doesn’t tell the whole story-- 11.5 million people, or 10% of the population, were affected by Haiyan, with hundreds of thousands displaced and just under $3 billion in damage sustained.

The most fatal storm of the 1964 season, Typhoon Joan wrought havoc across a South Vietnam that was already being roiled by the ongoing Vietnam War. Making landfall in central South Vietnam, the typhoon claimed 7,000 lives while displacing over a million more. Amplifying Joan’s destructive power was the unfortunate reality that most of Vietnam had barely begun to recover from tropical storm Iris, which hit the country a mere several days prior to Joan.

Typhoon Vera quickly overwhelmed all of Japan’s major coastal flood defenses in 1959, leaving little time to evacuate and devastating the country on such an unprecedented scale that it would come to be known as the deadliest typhoon to make landfall in Japan. Entire towns such as Nagashima were wholly submerged, leading to 5,000 deaths from drowning and disease. Vera’s shocking destruction led to the passage of a comprehensive 1961 flood defense reform package called the Disaster Countermeasures Basic Act.

Forget Hurricane Dorian: Meet the 5 Worst Hurricanes to Ever Hit the U.S.