U.S. Allies Gear Up for a North Korean Nuclear Test 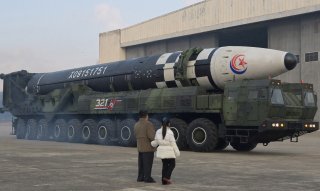 “What I can tell you is that our response will include something that has not been seen in the past,” Yoon told Reuters in an interview, without elaborating on specific measures. "It would be extremely unwise for North Korea to conduct a seventh nuclear test.

Yoon said China, North Korea’s major benefactor and a permanent member of the UN Security Council, can contribute to the denuclearization of the Korean Peninsula.

“I believe that China has enough capability to affect North Korea’s decision, not only in military aspects but also economically. However, it is up to China’s decision to what extent it will influence North Korea and how much it’s going to contribute to the peace and stability of the Korean Peninsula,” Yoon said, adding that North Korea’s belligerent behavior is spurring increased defense spending across the East Asia region.

The Japan Times reported on Tuesday that Japanese prime minister Fumio Kishida had instructed his government to boost defense spending to 2 percent of GDP by 2027, up from Japan’s longstanding cap of 1 percent. Yoon told Reuters that he seeks to ramp up military cooperation with Japan in the face of mounting threats from Pyongyang. "I believe the Japanese government cannot be asleep at the wheel with the North Korean missile flights over their territory," he said. President Joe Biden said after a trilateral meeting in Cambodia earlier this month that South Korea, Japan, and the United States “are more aligned than ever” against North Korea’s “provocative behavior.”

U.S. and allied officials said the DPRK is preparing to conduct its first nuclear test since 2017, though the timing remains unclear. North Korea has conducted a record number of missile launches in 2022, with Pyongyang threatening a “fiercer” response to continued regional joint exercises between the United States and South Korea.

North Korean leader Kim Jong-un said earlier this month that his country intends to field the world’s most potent nuclear arsenal. "Our great unremitting cause of building the nuclear force for reliably protecting the dignity and sovereignty of the state and the people through all ages is the greatest and most important revolutionary cause,”  he stated in a document cited by North Korean state news. “Its ultimate goal is to possess the world's most powerful strategic force, the absolute force unprecedented in the century.”