U.S. and South Korea Fire Back at North Korea With Missile Drills 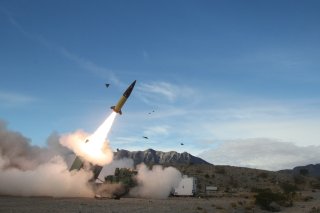 The United States and South Korea conducted missile drills off the coast of the Korean Peninsula on Wednesday in response to North Korea’s test launch of an intermediate-range ballistic missile (IRBM) the day before.

The joint test marks the allies’ second response to North Korea’s Tuesday launch, preceded by bombing exercises involving a South Korean F-15K fighter jet firing two Joint Direct Attack Munition precision bombs at a firing range on the Yellow Sea. "Through the combined flight of the air strike package and precision strike drills, South Korea and the United States demonstrated their will to respond sternly to any Northern threats as well as their capabilities to conduct a precision strike at the origin of provocations based on the alliance's overwhelming forces," the South Korean Joint Chiefs of Staff said in a statement.

Both sides fired a pair of ATACMS short-range ballistic missiles as part of the Wednesday launch. The test launch was intended to demonstrate that the United States and South Korea have “the military capabilities at the ready to respond to provocations by the North,” John Kirby, the National Security Council’s coordinator for strategic communications, told CNN. “This is not the first time we’ve done this in response to provocations by the North to make sure that we can demonstrate our own capabilities,” Kirby added.

North Korea on Tuesday launched an IRBM that flew over Japan and was capable of reaching the U.S. territory of Guam. The incident, which was among Pyongyang’s most provocative launches this year, drew swift condemnation from Washington and its allies. “We want to see the denuclearization of the Korean Peninsula, [North Korean leader Kim Jong Un] hasn’t shown an inclination to move in that direction, quite frankly he’s moving in the opposite direction by continuing to conduct these missile tests which are violations of security council resolutions,” Kirby told CNN.

The UN Security Council will hold an emergency meeting Wednesday at Washington’s request to discuss the launch. “We have called for a Security Council meeting to address the DPRK's dangerous long-range ballistic missile launch that overflew Japan,” Linda Thomas-Greenfield, the U.S. ambassador to the United Nations, wrote on Twitter. “We must limit the DPRK’s ability to advance its unlawful ballistic missile and weapons of mass destruction programs.”

The Tuesday test marks North Korea’s fifth missile launch in ten days. South Korea’s spy agency warned last week that the escalatory launches could soon be accompanied by the DPRK’s return to nuclear testing. Such a test may fall between October 16 and November 7, intelligence officials added.