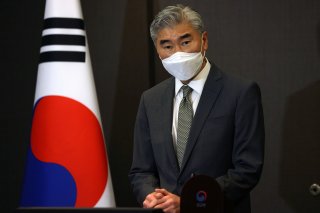 The U.S. envoy for North Korea is visiting South Korea this week, and that envoy told a Korean broadcaster in an interview that the U.S. is seeking bilateral talks with North Korea.

Sung Kim told the Korean Broadcasting System that the United States and North Korea can talk “anytime, anywhere, without preconditions,” according to NK News. He added in the interview that he has “no hostile intent” towards North Korea.

“I really do believe that there is an opportunity to make a serious progress with the DPRK. So I hope I would be able to sit down with my DPRK counterparts soon,” he said in the KBS interview.

The Diplomat reported more Tuesday about the visit, which is Kim’s second time in Seoul since he was appointed to the post.

“I think my visit here is another indication of Washington’s determination to maintain the closest possible cooperation with the Republic of Korea government on all issues related to North Korea,” Kim said. In addition to security discussions, Kim talked to the South Koreans about “possible humanitarian assistance to North Korea through international organizations such as United Nations.”

“Bilateral talks” are talks between only the two countries. Multilateral talks, which have taken place in the past in relation to North Korea’s nuclear program, consist of the two countries in addition to others. The diplomatic opening during the Trump administration, which led to President Donald Trump meeting with North Korean leader Kim Jong-un on multiple occasions, was an example of bilateral talks.

The State Department has published a fact sheet, dated August 23, on its website about relations with North Korea.

“Peace and prosperity on the Korean Peninsula is the ultimate goal for the United States in its relationship with the Democratic People’s Republic of Korea (DPRK). The United States works closely with allies and partners in the region towards greater peace and security in the region,” according to the fact sheet.

“In the past, the United States provided food and other emergency aid to the DPRK during times of famine and natural disasters, upon request by the DPRK,” per the fact sheet. “The United States does not currently provide any aid to the DPRK government. A number of U.S. NGOs have been active in the DPRK, through private and faith-based donor support, to provide aid to fight infectious diseases such as multi-drug-resistant tuberculosis and to improve farming practices and agricultural output in rural areas.”

The website also notes that the two countries do not presently have diplomatic relations, while the Swedish Embassy in the DPRK is the “protecting power” for the United States and “provides limited consular services to U.S. citizens.”