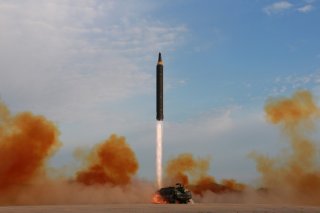 North Korea has not yet carried out a nuclear test, despite worries that it would attempt one prior to the U.S. midterm elections on November 8.

This week, the Pentagon said that the United States has a plan for what will happen in the event of a North Korean nuclear test.

"We are in very close touch with our allies and partners in the region, and should there be such a test, we would be able to respond quickly if needed," Sabrina Singh, deputy spokesperson for the Department of Defense, said on Friday, as reported by Yonhap News Agency.

“So we remain concerned about the prospects of any nuclear test. We know that the North Koreans have made preparations for such a test," Singh added in Friday’s press briefing. “And this assessment, you know, remains consistent with what we have said from the beginning, but we certainly would remain concerned and which is why you heard the secretary and his ROK counterparts speak to this yesterday.”

North Korea has launched a number of missiles in recent weeks, including eighty missiles over a three-day period last week. This led up to an intercontinental ballistic missile (ICBM) launch last week that was said to have failed, according to South Korean media. The launches were said to be in retaliation for the “Vigilant Storm” military exercises that the United States and South Korea have been conducting in recent weeks.

“The recent corresponding military operations by the Korean People’s Army are a clear answer of [North Korea] that the more persistently the enemies’ provocative military moves continue, the more thoroughly and mercilessly the KPA will counter them,” the General Staff of North Korea’s military said in a statement through state media, per the AP.

Also this week, per NK News, South Korea recovered what was likely debris from one of last week’s missile launches.

“The ROK military recovered an object on Nov. 6 presumed to be a remnant of a short-range ballistic missile (SRBM) that North Korea fired in its Nov. 2 provocation,” South Korean Joint Chiefs of Staff official Kim Jun-rak said in a defense ministry briefing this week.