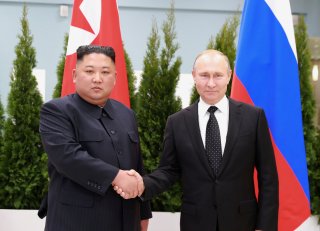 Since Russia’s invasion of Ukraine, many nations have imposed sanctions on Russia and restricted exports of certain technology with military utility. But North Korea isn’t one of them and now U.S. intelligence believes that Pyongyang is supplying the Russians with rockets and artillery, including “millions” of artillery shells.

According to an Associated Press report cited by the New York Times, the information came from a “newly-downgraded” U.S. intelligence report that “the Russian military continues to suffer from severe supply shortages in Ukraine, due in part to export controls and sanctions.”

“The Russian Ministry of Defense is in the process of purchasing millions of rockets and artillery shells from North Korea for use on the battlefield in Ukraine,” one of the U.S. officials told Reuters.

The Times described the deals as “a sign that sanctions and export controls imposed by the United States and Europe were hurting Moscow’s ability to obtain supplies for its army.”

North Korea has also reportedly offered to send construction workers to the region.

U.S. intelligence also believes that Russia could turn to North Korea for more weapons in the future. Last month, the U.S. government also stated that Russia has received drones from Iran to use for the war in Ukraine.

“Russian military is suffering from major supply shortages in Ukraine because of sanctions and export controls, forcing Russia to rely on unreliable countries like Iran for supplies and equipment,” a State Department spokesperson told CNN in late August.

“We’ll continue to vigorously enforce all US sanctions on both the Russian and Iranian arms trade and we will stand with our partners throughout the region against the Iranian threat.”

The disclosures, according to the Times, followed intelligence declassifications before the beginning of Russia’s invasion, first for allies and then the general public. The new information about North Korea follows a “lull” in such disclosures, the newspaper said.

“Broad economic sanctions, at least so far, have not crippled Russia. Energy prices, driven up by the invasion, have filled its treasury and enabled Moscow to blunt the fallout of its banks being cut off from international finance and curbs on exports and imports. Sanctions against individual Russian oligarchs also have failed to undercut the power of President Vladimir V. Putin,” the Times report said.

“But American officials said that, when it came to Russia’s ability to rebuild its military, the economic actions of Europe and the United States had been effective. American and European sanctions have blocked Russia’s ability to buy weaponry, or electronics to make that weaponry.”

The report added that while China has bought Russian oil at a discount, it has not been willing to sell Russia military equipment.