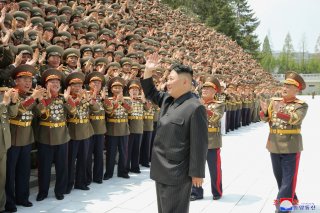 The media has been highly complimentary of Kim Jong-un’s appearance at the parade held earlier this week in North Korea, especially noting how great the North Korean leader looked.

And that’s not the North Korean state media, but rather major news outlets in the United States.

“Kim Jong Un still managed to seize the spotlight by looking thinner and more energetic than he has in years. During the event late Wednesday, Kim, wearing a cream-colored suit and a shiny white tie, emerged as the clock struck midnight. He beamed in response to thunderous applause from performers and spectators filling Pyongyang's brightly illuminated Kim Il Sung Square, named after his grandfather, the country's founder.”

Bloomberg News, on Twitter, noted that the leader “showed off a thinner frame and a trace of a tan,” along with a video of the parade.

“The slimmed-down leader — who wore a pale gray suit and matching tie for the event celebrating the country’s 73rd anniversary — was all smiles as he watched the procession, which notably did not feature the usual array of ballistic missiles,” the Post said.

And on Fox News Friday, contributor Rachel Campos-Duffy noted that Kim looked good—and in fact was looking “better than our president,” before another Fox contributor speculated, baselessly, that it wasn’t really Kim at the parade but rather a body double. Kim is believed to be thirty-seven years old, making him less than half the age of the seventy-eight-year-old President Joseph Biden.

The unusual reactions were enough to get Kim Jong-un’s name trending on Twitter Friday morning.

While most of the mainstream press in the United States had not taken note of it until now, Kim has been looking notably thinner for several months, kicking off lots of speculation among watchers of the goings-on in North Korea.

Kim first publicly appeared with his slimmer figure in early June. Vipin Narang, an associate professor of political science at the Massachusetts Institute of Technology (MIT), told NK News in June that the weight loss “likely improves his position at home… In turn [this] provides more predictability perhaps for regional actors like Japan, the ROK and the U.S. who may have greater confidence that he will be running the show.” However, if Kim has lost weight due to some type of illness, that would likely have the opposite effect.