U.S.-North Korea Diplomacy: The President Is Not the Problem, the Goal Is 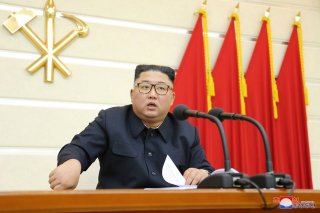 It is almost certain that if Joe Biden wins the White House this November, he will implement a very different approach to U.S.-North Korea relations than Donald Trump’s war scare, summit pageantry, and love letters to Kim Jong-un. Yet the specifics of Biden’s North Korea policy matter very little if he is still wedded to North Korea’s complete denuclearization. Without a different strategic goal, the Biden administration’s approach to North Korea can only fail.

Washington and its allies in East Asia need to come to terms with the fact that denuclearization is a chimera. Kim has made it clear through numerous high-profile political statements over the past few years that North Korea’s nuclear weapons are the ultimate guarantor of his country’s survival. Surrendering the nation’s “treasured sword” for anything less than a revolutionary change in U.S.-North Korea relations that completely removes the United States as a military threat to North Korea is a non-starter.

Kim is also wary of how the United States has treated other enemies that have given away or restrained their nuclear arsenals. He does not want to suffer the same fate as Libya’s Gaddafi, who was killed by U.S.-supported forces in a civil war less than ten years after handing over a fledgling nuclear weapons program at the negotiating table. The U.S.-Iran nuclear saga is also not heartening for North Korea. Tehran kneecapped its ability to produce weapons-grade nuclear material only to have a subsequent U.S. administration rip up the agreement. Even if Kim Jong-un surrendered his entire nuclear program to the Biden administration, there would be nothing to stop the next U.S. president from claiming that North Korea has a secret cache of nuclear material and returning to pressure tactics.

While denuclearization is no longer a realistic strategic goal, there are viable goals short of denuclearization that are easier, though by no means easy, to achieve and can improve security and stability for the United States and its allies.

North Korea was prepared to trade away at least part of its Yongbyon nuclear facility for sanctions relief at the failed Hanoi summit in February 2019. In other words, Kim was willing to restrain his ability to make fuel for new nuclear weapons, though not get rid of it entirely, for a corresponding U.S. step. The Yongbyon-for-sanctions formula is an example of how the United States ought to be thinking about nuclear diplomacy with North Korea. Kim will not agree to denuclearization, but his willingness to restrict aspects of his nuclear program would be a win for the United States.

A step-for-step approach that emphasizes arms control and nuclear threat reduction instead of elimination would mark a reduction in U.S. strategic goals, but it may be possible for the United States to achieve these new goals. If a future Biden administration wants to make real progress on North Korea, it needs to see Pyongyang’s nuclear weapons as a threat to be managed rather than a problem to be solved. Abandoning denuclearization, or at least relegating it to the distant future, is a necessary first step toward coming up with strategic goals that are both attainable and beneficial.

Eric Gomez is Director of Defense Policy Studies at the Cato Institute and Co-Author of America’s Nuclear Crossroads: A Forward-Looking Anthology.