U.S.-North Korea Summit Proves to Be All Talk, No Seoul 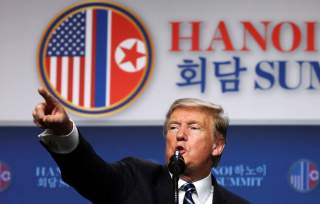 Moon Jae-in was a very busy man last week. He spent three days in Northern Europe with a large host of dignitaries and very important people. During that time he engaged in a “hackathon” with the Finlandian president, held talks with the Norwegian prime minister, and attended a state dinner with the king and queen of Sweden. It was an opportunity for the South Korean president to play the statesman and escape the rough-and-tumble politics of Seoul for at least a few days.

Moon, however, has a big problem. He has staked his five-year tenure in large part on transforming inter-Korean relations and turning the page on seven decades of animus on the Korean Peninsula. So, he can’t escape the North Korea file for long—even when he is in the Nordic.

In fact, Moon delivered two speeches during his three-day trip, which were heavily devoted to his peace project with the North. His June 14 address to the Swedish parliament, in which Moon predicted that the “international society will immediately respond if North Korea puts forth sincere efforts” towards denuclearization, was a public plea to knock some sense into the North Korean elite. By pushing Pyongyang into fulfilling its obligations in the letter and spirit of the three inter-Korean summits last year, Moon was sending a very basic message to North Korean leader Kim Jong-un: we are in this thing together, so help me help you.

The Moon administration knows that it is operating on borrowed time. While Moon Jae-in is still totally committed to inter-Korean reconciliation—recently proclaiming that he would meet with Kim anytime and anywhere the North Korean wishes to participate in another summit—he isn’t immune to the political challenges. Moon’s poll numbers, in the 80s during his first few months on the job, have fallen off a cliff. They now sit at 45 percent, according to a Gallup Korea poll that was conducted in May. The fruits of the April 2018 summit in the Joint Security Area, where Moon and Kim pledged to embark on a fresh start after an eleven-year absence of dialogue at the leadership level, are beginning to spoil.

The comprehensive military agreement signed last September is stuck somewhere between comatose and life-support. It’s getting more difficult for Seoul to continue the momentum each day that Pyongyang refuses to pick up the phone. There hasn’t been an inter-Korean liaison office meeting at the senior level since the collapse of the Trump-Kim summit in Hanoi last February—sessions that are supposed to be held weekly. Joint recovery operations of Korean War remains, a project designed to be a confidence-building step on the road to a wider reconciliation, have been suspended as of this writing.

The North Koreans are showing their displeasure about how the inter-Korean track is progressing (or rather, not progressing), both by condemning Seoul for an array of offenses in state media organs and by taking actions like the launching of the occasional short-range missile. Kim Jong-un, whose sincerity in denuclearization talks with the United States was always doubtful, is increasingly questioning Moon’s ability to produce the sanctions relief Pyongyang desperately wants. Indeed, Pyongyang wants Seoul to stop being a mediator and to start breaking away from its most important security ally. From where the Kim regime sits, Moon’s rosy rhetoric about bringing North Korea into the community of nations and uniting the Korean people mean nothing if they aren’t followed by bold action—action Moon himself would be crazy to take given the economic and political devastation that would be produced from Seoul violating U.S. and UN sanctions.

Some observers describe Moon as being between a rock and a hard-place. It would be more accurate to compare Moon to an abused referee between two heavyweight boxers. Except instead of the boxers landing punches on each other, the referee is the one getting the broken nose. Moon is in a terrible position—any choice he makes will be criticized from one side or the other.

Moon Jae-in’s desire to permanently lift the structure of hostility from the Korean Peninsula is about as noble a goal as any leader can have. But under the current circumstances, Moon is trapped in a meandering circle—he can’t succeed in establishing inter-Korean peace without North Korea doing something significant on denuclearization, yet he is facing a leader in Pyongyang who won’t do anything on the denuclearization front without progress on reconciliation.

Seoul is unable to do much on inter-Korean relations was long as all of the leverage resides in Washington’s hands. With the Trump administration holding all of the goodies, there isn’t much the South Koreans can offer that would be attractive enough for the North to take North-South talks seriously again.

President Moon is in a hole he will be able to get out of as long as President Donald Trump tosses him a rope. If the situation doesn’t change, then it won’t matter how many speeches he delivers or how much political courage he shows on behalf of an objective everyone should support.