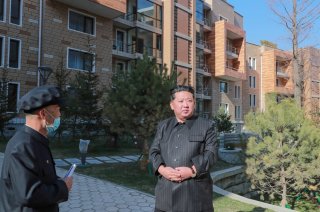 North Korea has been in the news for two big things in recent weeks: its large outbreak of Covid-19 cases, and its continuing nuclear brinkmanship.

A U.S. diplomat said this week that any negotiations about the latter will not involve the former.

According to Yonhap News Service, Daniel Kritenbrink, the U.S. assistant secretary of state for East Asian and Pacific affairs, said this week that the government will not link humanitarian assistance to North Korea with any future denuclearization talks.

"We are also gravely concerned by the serious outbreak of COVID-19 underway in the DPRK right now, and how it may affect the health and well being of the North Korean people,"  Kritenbrink said while speaking at a forum hosted by the Center for Strategic and International Studies and the Korea Foundation.

“We continue to support efforts to provide humanitarian assistance and COVID-19 vaccines to the DPRK. We see this humanitarian crisis as separate from making progress on denuclearization and we do not and will not link the two,” Kritenbrink added.

The United States and North Korea have not engaged in any direct diplomacy since the summits between Kim Jong-un and then-President Donald Trump in 2018 and 2019, but the Biden administration has continually said it is open to new talks.

"We do, however, continue to believe that we can find a peaceful and diplomatic resolution with the DPRK. We have a practical calibrated approach. The United States harbors no hostile intent towards the DPRK and the path to dialogue remains open," the diplomat added.

In another report from the weekend by Daily NK, the North Korean regime warned that the current outbreak of “fever” could hit a crisis point in June or July.

The State Emergency Anti-epidemic Command (SEAC), per the site’s source, issued an order last month to cities, counties, and provinces.

“The government called on people to remember that if they neglect to wear masks because it’s hot in summer, the virus could spread sharply and infections could accelerate,” the Daily NK source said. “It also called for the balanced redeployment of medical professionals from big hospitals to clinics and quarantine stations so that they will be able to respond quickly to outbreaks during the summer.”

For more than two years, North Korea denied that it had any coronavirus cases at all, including in reports to the World Health Organization. That changed this spring when the country acknowledged an outbreak. Health officials are especially worried since North Korea lacks modern healthcare infrastructure and has refused any vaccines from outside nonprofit organizations.