U.S.-South Korea Alliance: 5 Reasons America Should Be Thankful For It 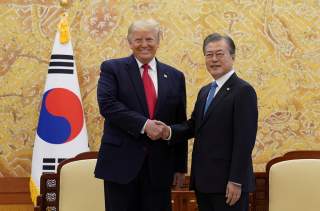 U.S. President Donald Trump has demanded a major increase in South Korean support for U.S. forces stationed in that country. He has accused Seoul of cheap-riding on the United States, as he has many other U.S. allies. This is an unnecessarily narrow, almost mercenary view of the relationship. So on Thanksgiving, it is worth considering what the US might be thankful for in its relations with the Republic of Korea:

1. South Korea has been a reliable ally for almost the entire history of its alliance with the United States:

The U.S. alliance with South Korea goes back to the 1950s, and for most of that time, Seoul has been a loyal, well-behaved ally for the U.S. in a tough part of the world. South Korea has not, for example, using the U.S. commitment to pursue reckless options against North Korea. It has generally followed Washington’s inclinations on Pyongyang, as it has on the Soviet Union/Russia and China. It does not have a record of what Barry Posen calls ‘reckless driving’ – abusing a patron’s goodwill to pursue parochial interests that entrap the US in unnecessary conflicts. U.S. clients in the Middle East – Saudi Arabia, Israel, Egypt, Turkey – have long done this, in contrast to docile South Korea.

2. South Korea does, in fact, pay a lot already for U.S. forces:

It is true, per the Trump administration, that South Korea could pay more. It is indeed wealthy, as the secretary of defense has pointed out. But the South already foots around half the cost, plus sending US forces back to the US would incur new costs of maintaining those soldiers there which are now carried by Seoul. Further, South Korea spends a proportion of GDP on defense greater than all US allies in NATO, plus Japan. And that figure is rising. The South Koreans are carrying their weight and are far more conscious of doing so than other US allies (especially in the Middle East).

3. South Korea has been very stable and maintained itself well in the long, grueling stand-off with the North without excessive U.S. intervention:

Throughout the Cold War, U.S. anti-communist allies frequently got into trouble and called on the US to help them out. The U.S. found itself intervening around the third world, often in conflicts of minimal actual value to the balance between the U.S. and the Soviet Union. But anxieties about ‘falling dominoes’ and communist insurgencies spreading like wildfire often sucked the US grudgingly into the periphery. The most famous example of this is Vietnam of course, but in Latin America and Africa, the U.S. also got involved in repeated, deeply divisive proxy conflicts.

This never happened to South Korea, despite its obvious attraction to communist subversion. North Korea sought for decades to provoke a revolution in the South to little avail. South Korea, unlike South Vietnam, developed a reasonably clean and well-functioning state, which eventually graduated into a real democracy. Very few other U.S. clients and allies from the third world managed such a remarkable transition. South Korea might easily have succumbed to communist pressure like Batista’s Cuba, South Vietnam, or Chiang Kai Shek’s China; it might also have slid into permanent weak-stateness like the Phillippines, Indonesia, or Pakistan. Instead, the South went eyeball-to-eyeball with the world’s most horrific totalitarianism and emerged as a stable state independent of U.S. intervention, and a democracy. This is a vastly better outcome for US policy in Korea than anyone expected in the 1950s.

Not all U.S. allies share South Koreans’ enthusiasm for the United States. Many of America’s partners in the Middle East have large anti-American popular movements. Western European countries have long vacillated on the U.S. embrace, as has Latin America. U.S. behavior, especially in Latin America, has contributed to this of course, but it is noticeable that South Korean commitment to the alliance has remained high and positive for decades, through all sorts of turbulence and change. Even today, South Korea’s dovish president, Moon Jae-In, finds himself constrained by deep public support for the U.S. alliance. Moon wants to freelance-détente with North Korea far more than the U.S. will countenance, but he has consistently faced substantial domestic pressure to not wander too far from the U.S. position for fear of damaging relations with Washington.

5. East Asia is the cockpit of international relations in the future, and it is good that the US has a solid ally there.

The long-term rise of Asian economies means a rebalancing of global politics toward that region. US relationships in Europe will retain value due to Europe’s continuing importance. But as wealth and growth flow to Asia too, the US will need friends and allies there too, and South Korea has long been that (as has Japan). The US relationship with South Korea has long been more predictable and placid than US relations with NATO (which plunged in the 1970s and after 9/11) or in the Middle East where reckless client behavior keeps pulling the US deeper in.

So can the South Koreans pay more? Sure. And they likely will. But shaking down South Korea for cash as if the U.S. is a mercenary is wrong. It violates many decades of South Korean goodwill toward the US. On Thanksgiving, that is something geopolitically which we Americans should be thankful for.