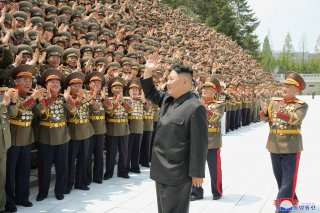 There has been a great deal of controversy about North Korea, coronavirus, and vaccines.

North Korea has claimed repeatedly, including as recently as this week, that it is entirely free of the coronavirus, despite taking stringent measures to mitigate the effects of the pandemic.

COVAX, a UN-affiliated organization that has been distributing vaccines to various countries throughout the year, was scheduled to deliver millions of doses to North Korea earlier this summer, but talks reportedly stalled. COVAX also planned additional deliveries to the country in early August.

The group offered North Korea three million doses of the Sinovac vaccine this month, in addition to the 1.7 million AstraZeneca doses that remain in limbo.

Meanwhile, a new report claims that North Korean leader Kim Jong-un may have received a coronavirus vaccine earlier this year.

According to Daily NK, “rumors are circulating” that Kim received a COVID jab back in May. The rumors say that Kim received the vaccine at “a villa located away from Pyongyang,” and that he had suffered “high fever and nausea” after the shot. That would coincide with one of the leader’s lengthy disappearance from public view, which went from early May to early June. This was the disappearance from which Kim returned having lost a considerable amount of weight, setting off speculation as what the leader’s weight loss meant for his position.

“North Korean cadres believe it highly likely Kim was vaccinated at this time,” according to the report. “There are even rumors that about 100 people have been vaccinated, including high-ranking cadres who meet with Kim in person.”

The rumors indicate that Kim was likely not the first person in North Korea to get the shot, since a “test vaccine” was likely given to at least one other person before Kim was allowed to take it. Also, the vaccine was likely from the cache of Sinopharm vaccines distributed to North Korea by China earlier this year.

The Daily NK story also said that part of Kim’s version to get vaccinated was as part of a plan to engage in in-person diplomacy at some point this year.

“North Korean authorities hope to arrange a meeting between Kim and Chinese leader Xi Jinping in the latter half of the year,” Daily NK’s source said. “And if the conditions are right, the authorities reportedly believe Kim could engage in dialogue with the United States as well.”

ABC in Australia quoted South Korean intelligence sources last month as stating that they do not believe that Kim has been vaccinated.

“The National Intelligence Service (NIS) told lawmakers in a closed-door briefing that it has not detected any information that North Korea has acquired vaccines,” the Daily NK reported, citing legislator Ha Tae-keung.