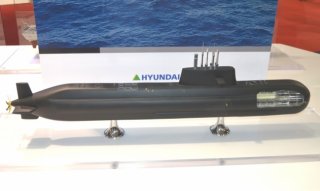 South Korea recently test-fired what may very well be Seoul’s first submarine-launched ballistic (SLBM) missile. South Korean media cited a Republic of Korea (ROK) military official, who explained that the test launch came at the end of last year. The test makes South Korea the eighth country in the world to have overcome the engineering difficulties inherent to SLBM launches.

Specific details about the test are scant. However, the missile in question is reportedly a variant of South Korea’s Hyunmoo 2B missile, a relatively short-range solid-fueled ballistic missile that is equipped with a conventional high-explosive warhead. Various sources on the missile’s range differ, as several variants exist, though the missile’s upper range limit appears to be around eight hundred kilometers or about five hundred miles.

Although the ROK Navy conducted the test from an underwater launch platform, the missile is expected to ultimately arm the ROK Navy’s yet-to-be-commissioned Dosan Ahn Changho-class submarine—the first of an advanced class of attack submarines.

There are expected to be nine hulls in total, with the first submarine entering service with the RoK Navy sometime next year. Although the Dosan Ahn Changho-class submarines are diesel-electric, they are of a very advanced design and equipped with high-performance fuel cells which allow the submarine to remain submerged for extended periods of time.

The indigenously-built and designed submarines are the largest subs ever built for the ROK Navy, and the first submarines capable of vertically launching SLBMs or land-attack cruise missiles. The first submarine is expected to enter service with the RoK Navy in the very near future, possibly as soon as next month.

The submarines that comprise the Dosan Ahn Changho-class will not be identical but rather divided into several “batches” each with slightly differing characteristics. Though all Dosan Ahn Changho-class submarines will remain attack submarines, subsequent hulls are expected to incorporate a higher degree of indigenously designed sensors and combat components and will be somewhat lengthened in order to accommodate a higher number of vertical launch cells and therefore a higher number of land-attack or SLBMs.

Seoul may not be the only country on the Korean Peninsula mating SLBMs to submarines, however.

A recent report indicates that, despite the aged and decrepit nature of North Korea’s submarine fleet, the country’s navy may be taking steps to integrate SLBMs to at least one of its naval submarines. This reflects Kim Jong-un’s stated desire to field long-range ballistic missiles capable of striking the American mainland.

Though Seoul’s new submarine-launched ballistic missiles and the submarines that would launch them are still in their infancy, both developments are a significant achievement for the country and would add a potent new arrow to South Korea’s quiver.